The Rumble Along the Suwannee River 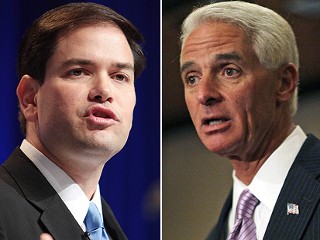 By Beth Reinhard and Lesley Clark
The Miami Herald

Gov. Charlie Crist tried to chip away at his U.S. Senate rival’s conservative boy-wonder image during their first televised debate Sunday but failed to deliver a broadside powerful enough to level the surging Marco Rubio.

Fox News Sunday host Chris Wallace’s pointed questions were more effective than Crist’s constant digs at exposing Rubio’s shortcomings. The debate immediately turned hostile and stayed that way, suggesting that voters should brace themselves for another five months of feuding before the Aug. 24 Republican primary.

The leading Democratic candidate, Kendrick Meek, who trails the Republicans by double digits in the polls, criticized the debate’s negative tone from the sidelines.

Crist and Rubio didn’t agree on much during the 40-minute debate except that the race boils down to “trust.”

“Everyone knows you won’t stand up to the Obama agenda because just a year ago you were campaigning for it,” Rubio said.

Crist countered, “If trust and confidence in an individual, what they say and what they do, isn’t relevant, then I don’t know what is.”

He tarred Rubio as a “lawyer/lobbyist” and called the $600,000 he raised for two political committees a “slush fund.” The Miami Herald and The St. Petersburg Times have reported that much of the money went to reimbursing unitemized travel expenses for Rubio and his wife.

No ‘special relationship’ between Britain and US: MPs 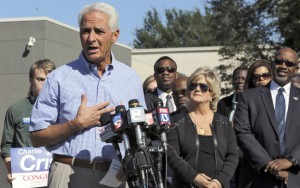 American voters should build strength in the center of the political spectrum.
State Socialism is abhorrent, but so is unyielding extreme conservatism.