Things Obama Is Doing Instead of Going to Gulf: Duke Photo, Lunch with Bill, Vacation… 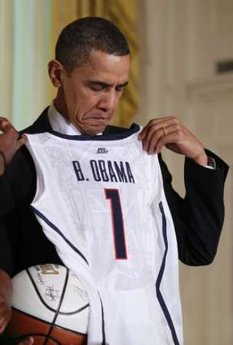 This morning, President Obama will meet with the NCAA menâ€™s basketball champion Duke Blue Devils at the White House to honor their 2009-2010 championship season in the Rose Garden.

Keeping up the sports theme, the president and the vice president will take a photo with the U.S. World Cup soccer team and former President Bill Clinton, who is chairing the 2018 World Cup bid, on the North Portico. The White House has previously announced that Vice President Biden and Jill Biden will attend the World Cup in South Africa next month.

Afterward, the president will a private have lunch with President Clinton in the Private Dining Room.

In the afternoon, the President will deliver remarks on the BP oil spill and the conclusions of his ordered 30-day safety review and hold a press conference in the East Room.

The president will announce standards to strengthen oversight of the industry and enhance safety, a first step in a process that the independent Presidential Commission will continue, a White House official says.

In the meantime, the moratorium on permits to drill new deepwater wells will continue for a period of six months. In addition, the planned exploration off the coast of Alaska in the Chukchi and Beaufort seasÂ will be delayed pending the Comissions review and the August lease sale in the Western Gulf will be cancelled. The lease sale off the coast of Virginia will also be cancelled due to environmental concerns and concerns raised by the Defense Department.

After taking questions from press, the President will then receive a briefing in the Situation Room on the 2010 hurricane season forecast and an overview of the federal governmentâ€™s national hurricane preparedness. The briefing will be led by DHS Secretary Janet Napolitano, FEMA Administrator Craig Fugate and NOAA Administrator Dr. Jane Lubchenco, as well as five FEMA Regional Administrators.

In the afternoon, Mr. Obama will hold a bilateral meeting with President Ellen Johnson Sirleaf of Liberia in the Oval Office.

Later in the afternoon, the President, the Vice President and First Lady Michelle Obama will host a reception in honor of Jewish American Heritage Month in the East Room.