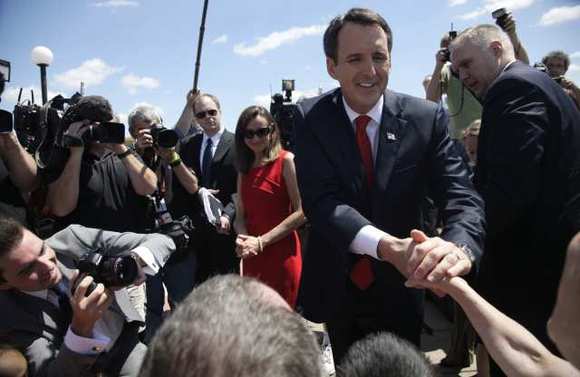 Tim Pawlenty‘s presidential campaign rests on this question: Will Republican voters itching for confrontation withÂ President Obama deliver their nomination to a man who tends toward soft-spoken and bland?

As he formally announced his run here Monday, the former Minnesota governor sought distance from theÂ GOP field by casting himself as an everyman who would speak frankly to Americans about the gravity of the nation’s challenges.

Charging that Obama has failed to tackle difficult issues like entitlement reform and warning that “the pain of the recent recession will pale in comparison to what’s coming,” Pawlenty chided the president for backing a “pork-filled stimulus bill” and financial bailouts for well connected businesses, and called his healthcare plan “an unmitigated disaster for our country.”

“Someone has to stand up and finally level with the American people,” Pawlenty told an audience of several hundred people in Iowa, which is likely to serve as a pivot point for his bid. “Someone has to lead. I will.”

If Pawlenty, introduced by his wife as “the salt of the earth,” was more tart than usual, he still evinced the comfortable Midwestern appeal that he hopes will make him more palatable than the alternatives that could confront Republican voters.

In early primary states like New Hampshire, Pawlenty is trailing far behindÂ Mitt Romney, the national front-runner with a prodigious fundraising base. In Iowa, Pawlenty is also competing for attention with GOP veterans likeÂ Newt Gingrich, who is trying to parlay his extensive network nationwide, while trying to outshine three potential candidates who appeal to the evangelicals who dominate the caucuses here: his Minnesota colleague, Rep. Michele Bachmann, formerÂ Alaska Gov. Sarah Palin and former Pennsylvania Sen.Â Rick Santorum.

“Somebody like Palin â€¦ or Bachmann is anywhere from neon yellow to red hot,” said Dennis Goldford, a politics professor at Drake University inÂ Des Moines. “Pawlenty is beige and he’s trying to make beige work for him.”

Many voters here say they are already wrestling with conflicting desires: backing a GOP candidate who will echo their anger â€” like Palin or Bachmann â€” or, alternatively, supporting a less-polarizing presence â€” like Pawlenty â€” with proven appeal to the swing voters who are likely to decide the election.

“It’s a choice between the head and the heart,” Goldford said.

For Pawlenty, the next 18 months will be a steep climb. Though he was the governor of a neighboring state, he is not well known beyond it. In interviews with more than two dozen voters across Iowa last week, his name rarely popped up as a first choice. Voters often had to be reminded that he was running before adding him to their lists.

“He has a nice personality, but I don’t think he has the fire that he needs to get elected,” said retired teacher Roberta Mahoney of Oelwein after attending a weekend house party for Santorum. “Too nice.”

Craig Robinson, founder and editor in chief of the Iowa Republican website, noted that Pawlenty had shied away from distinguishing himself even from fellow candidates like Romney.

“Being aggressive is going to be rewarded in any primary,” said Robinson, the former political director of the Republican Party of Iowa, who added that Pawlenty “really needs to step it up.”

“People are looking for someone who is going to challenge the president…. They are saying, ‘If you’re not doing it now, I don’t think you’re going to do it in November.’ ”

Pawlenty showed a bit of a harder edge in Des Moines on Monday. Scoffing at what he described as the president’s “fluffy promises of hope and change,” he unveiled a theme that will set the framework for his 2012 campaign: Pawlenty argued that the president, and in some cases Republican leaders, had not been forthcoming about trillions of dollars in cuts that would be needed to ease the deficit.

Though Pawlenty touted his record of fiscal discipline in Minnesota, Democrats immediately pointed out that now, within months of his departure, state leaders are grappling with a projected deficit of $5 billion â€” one of the highest in the nation as a percentage of the state’s general fund.

From Iowa, Pawlenty said, he was headed toÂ Florida to make the case to wealthy seniors and young people that Social Security should become a means-tested program with a higher retirement age.

To applause, he said he would also visit Wall Street to tell the financial industry that if he’s elected, “the era of bailouts, handouts, carve-outs are over.” Testing the patience of Iowa voters, he also advocated phasing out ethanol subsidies â€” a potentially perilous position given that corn farmers have grown dependent on them.