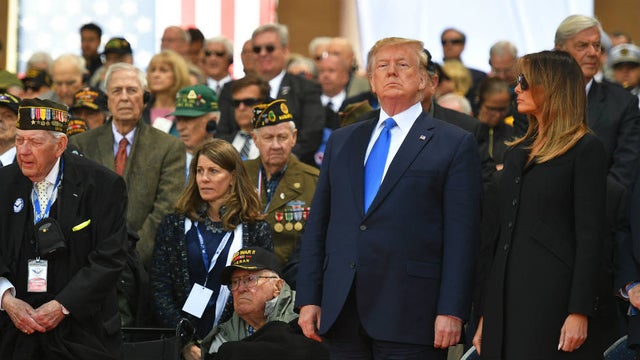 President Trump on Thursday joined French President Emmanuel Macron and other world leaders in Normandy to commemorate the 75th anniversary of the D-Day invasion, offering praise for those who stormed the beaches, dozens of whom were in attendance.

“To more than 170 veterans of the second World War who join us today, you are among the very greatest Americans who will ever live,” Trump said. “You are the pride of our nation. You are the glory of our republic. And we thank you from the bottom of our hearts.”

“We know what we owe to you veterans: our freedom,” Macron said. “On behalf of my nation I just want to say thank you.”

The two leaders delivered remarks at a ceremony in Colleville-sur-Mer in Normandy. Seated behind them were more than 150 World War II veterans, roughly 60 of whom were part of the forces on D-Day.

As the two leaders arrived, they shook the hands of many of the veterans on hand. Macron later awarded five of the servicemen with the French Legion of Honor, the country’s highest distinction.