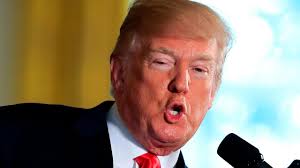 President Trump on Thursday questioned whether the Obama FBI “spied” on his presidential campaign, on the heels of an extensive report on the Russia investigation’s origins that said a government informant met several times with Trump’s former advisers.

Rudy Giuliani, a member of the president’s outside legal team, also told “Fox & Friends” that former FBI Director James Comey “should be prosecuted” if his bureau spied on the campaign.

The fiery statements came on the one-year “anniversary” of Special Counsel Robert Mueller’s investigation, which picked up where the bureau left off. The New York Times sought to give a definitive accounting Thursday of the original investigation — and in the middle of their report, revealed that officials confirmed “at least one government informant met several times with Mr. [Carter] Page and [George] Papadopoulos,” both former campaign advisers.

This explosive line is sure to fuel Republican efforts on Capitol Hill to review records relating to an unidentified FBI source — and his or her role in the Russia probe.