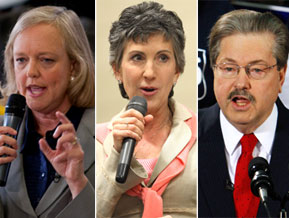 South Carolinaâ€™s freak show politics, the progressive leftâ€™s Arkansas muscle flexing, the astounding and obscene amount of statewide election spending in California â€” at least $120 million-plus and rising â€” all of it is part of Tuesdayâ€™s dramatic primary election narrative.

Yet the headline-grabbing excesses of a few states have obscured a larger fact: With a Senate runoff, a House special election and 10 states going to the polls, itâ€™s the single biggest day on the 2010 election calendar prior to November.

With so many contests on the ballot, here is POLITICOâ€™s guide to the nine best races to watch Tuesday.

With Democratic Sen. Blanche Lincolnâ€™s career on the line, this one easily rates as the dayâ€™s marquee Senate contest.

Sure, this race is about ambition â€” no one has ever described Lt. Gov. Bill Halter otherwise â€” but the real story of the runoff is in its implications for Democratic centrists across the nation.

Fueled by progressive support, Halterâ€™s campaign accelerated from zero to 60 in almost no time, rapidly closing the gap on a well-funded, scandal-free two-term incumbent who carried the White House imprimatur.

Whether Halter topples Lincoln or not â€” he had a slight edge in the most recent poll â€” the lesson many moderates will take from Arkansas is clear: Donâ€™t mess with the left.

It wonâ€™t necessarily be obvious this year since many filing deadlines and primary dates have already passed, but it will be over the next two years. There are 21 Senate Democrats up for re-election in 2012 and a handful of them will be eyeballing the Arkansas results for clues on what to expect. And if their voting records donâ€™t reflect their uneasiness, their early campaign treasuries will.

What more can be said about the depravity of South Carolina politics?

Somehow, after sidestepping racial slurs and late-breaking allegations that she had engaged in extramarital affairs, state Rep. Nikki Haley remains in a commanding position in the Republican primary for governor.

Few doubt sheâ€™ll finish first on Tuesday, so the only remaining question is whether she can break the 50 percent necessary to avoid a June 22 runoff.

If she wins the GOP nomination, sheâ€™ll be the heavy favorite in the fall to become South Carolinaâ€™s first female governor. And if that occurs, as a female, Indian-American governor of a Southern state â€” and one that is critical in the presidential nominating process â€” Haley will suddenly become one of the hottest properties in the Republican Party.

While the jokes about the GOPâ€™s diversity wonâ€™t stop, it will be hard not to notice that the Republican Party has two Indian-American governors in the Deep South.