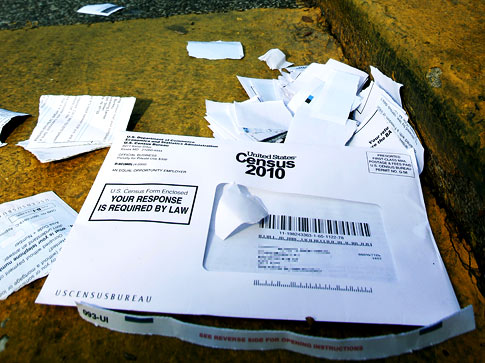 Instead of pounding the pavement and knocking on doors, the corner-cutting people-counters mined the phone book and Internet to make up answers to questionnaires, regional directorÂ Tony Farthing said.

The managers – turned in by whistleblower employees – were caught last week. Now, at least 10,000 surveys need to be done or redone, officials said.

Census officials inÂ Washington only admitted to a string of incomplete forms and poor tracking in disclosing the firings Friday afternoon. But Farthing corroborated worker accounts to the Daily News that managersÂ Alvin Aviles andÂ Sonya Merritt began dummying up responses in the final crush to finish the surveys, which field workers are supposed to compile from in-person household visits.

“Basically, people were being asked to forge [questionnaires],” said one worker in the North East Brooklyn office, which covers 95,000 households.

“We went in and did a full investigation,” Farthing said. “We found out two managers on the weekend of the 12th of June cheated by using phone books or Internet sources.”

A worker told the Daily News that when field interviewers returned to the office with blank forms, Aviles also enlisted some of them in the scheme. “He had people fill them in,” the worker said.

Aviles and Merritt could not immediately be reached for comment.

Farthing said he believes the branch’s earlier work is kosher, but the pair decided to break the rules at crunch time when they were looking at a huge stack of unfinished surveys, and their bosses were pushing for results, even if it meant more night work.

“We were telling them to go back on all non-interviews and hit this stuff hard. None of this 9-to-5 stuff, go when they know someone will be home,” Farthing said. It was then, Farthing said, that the managers “came up with the bright idea, or not-so-bright idea” – to save time.

The Census bureau was not able to estimate how much it will cost to redo all the work, but a spokesman said it was not an issue because the bureau was under budget on the massive project. Farthing said the honest workers left in the office are redoing 5,000 or so interviews that may be tainted.

“We’re not happy about what happened,” he said, noting that Aviles and Merritt were turned in by the very people they trained.