Two U.S. senators in jeopardy on big day of voting 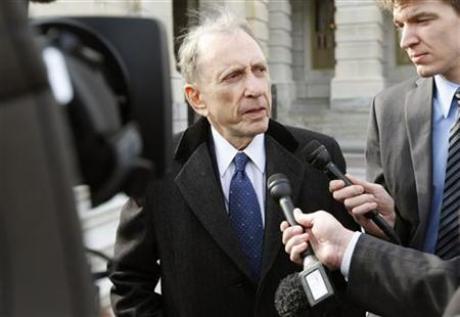 Democrats Arlen Specter of Pennsylvania and Blanche Lincoln of Arkansas face strong tests from the left. Also, a U.S. Senate race in Kentucky between a Republican establishment favorite and a conservative “Tea Party” activist will test the strength of that loosely organized movement.

Kentucky will be the first state to close its polls, with voting ending at 7 p.m. EDT in the months-long, state-by-state process of the two parties picking their candidates for November’s congressional elections.

The three primary election battles highlight the biggest day of voting so far in a year when opinion polls find a sour voter mood fueled by distrust of Washington and worries that neither party is doing enough to rescue the economy and restrain government spending.

That mood, which pollsters say is the strongest in decades, threatens to sweep away many well-known incumbents and put Democratic control of Congress at risk in November’s election when all 435 House of Representatives seats, 36 of 100 Senate seats and 37 of 50 state governorships are at stake.

“If you’re an incumbent, it doesn’t matter what party you are in — you better take this seriously. People are angry,” said Brad Coker of Mason-Dixon Polling and Research.

Prominent incumbents in each party — three-term Republican Senator Robert Bennett of Utah and 14-term Democratic Congressman Alan Mollohan — already failed to win their party nominations in a possible sign of things to come.

Specter, a 30-year Senate veteran and former chairman of the Judiciary Committee, would be the biggest incumbent to go down so far this year if he loses on Tuesday.

He switched from Republican to Democrat last year after realizing he could not win a Republican primary but a 20-point lead over Representative Joe Sestak has slipped to a dead heat as Sestak questioned Specter’s party credentials.

“As we have seen elsewhere this spring, there is an anti-incumbent mood in the electorate and Specter, with 30 years in the Senate, is the ultimate incumbent,” Quinnipiac University pollster Peter Brown said.

Party officials have rallied to Specter’s aid and he aired an ad featuring President Barack Obama praising him. But even with a primary victory, Specter would face a tough re-election fight in November against Republican Pat Toomey.

The polls in Pennsylvania close at 8 p.m. EDT.

In Arkansas, two-term incumbent Lincoln is in a heated primary race with Lieutenant Governor Bill Halter, who has been backed by labor unions unhappy with Lincoln’s failure to support a bill making it easier to organize workplaces.

During the debate on an overhaul of financial regulations, Lincoln introduced a tough bill to force investment banks to dump their derivatives businesses in what critics called an overture to the left.