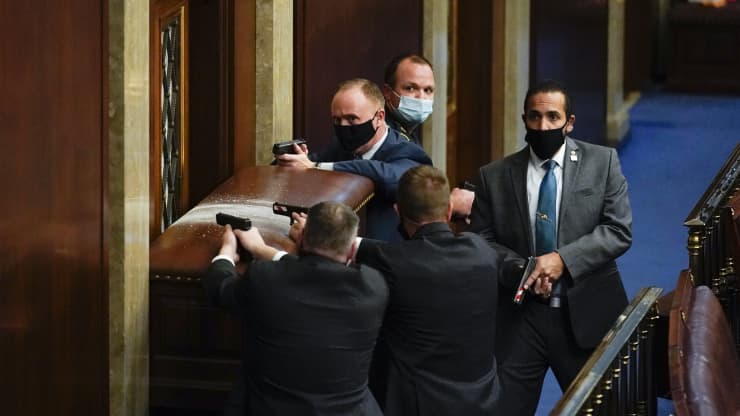 WASHINGTON — The U.S. Capitol was finally secured Wednesday, hours after supporters of President Donald Trump invaded the halls of Congress to disrupt the confirmation of Joe Biden as the next president.

Protesters had freely roamed through the Capitol complex, including the Senate chamber, where one man stood on the president of the Senate’s chair and shouted, “Trump won that election!”

Several law enforcement officials said a woman who was shot by police inside the Capitol building during the chaos had died. A video circulating on social media showed a woman falling from the window of a doorway in the Capitol, apparently after being shot.

Three other people died from medical emergencies that arose during the riot.

Vice President Mike Pence, who had been presiding over the count of Electoral College votes, was rushed out of the Senate as the Capitol complex went into lockdown when Trump supporters began pouring into the building.

Pence, House Speaker Nancy Pelosi, D-Calif., and Sen. Charles Grassley, R-Iowa, who are all in the line of presidential succession were taken to secure locations.

Members of Congress were ordered to take shelter in the complex, where at least one improvised explosive device was found. Another pipe-bomb-like device was found at the headquarters of the Republican National Committee.

As rioters, many of them clad in hats bearing Trump’s “Make America Great Again” motto, rampaged, Senate staffers removed the Electoral College ballots that had been on the floor of the Senate during proceedings, according to Sen. Jeff Merkley, D-Ore.

“if our capable floor staff hadn’t grabbed them, they would have been burned by the mob,” Merkley tweeted.

Other tweets and broadcasts showed shocking images of a protester dangling from the balcony of the Senate chamber, a woman drenched in blood on a stretcher and Capitol police pointing guns on the floor of the House of Representatives.

Members of Congress were photographed wearing plastic breathing devices over their heads to protect themselves from tear gas. CNN broadcast an image of protester sitting at Pelosi’s desk, with a handwritten note near her computer that read, “WE WILL NOT BACK DOWN.”

Hours after the riot began, authorities began tossing flash-bang grenades and dispersing tear gas into a crowd of people in front of the Capitol building.

“This is a coup attempt,” tweeted Rep. Adam Kinzinger, an Illinois Republican.

“This is what the president has caused today, this insurrection,” said Romney, the GOP’s 2012 presidential nominee.

Trump, during a rally earlier outside the White House, had encouraged thousands of supporters to march to the Capitol to protest what historically have been ceremonial proceedings.

Trump’s personal lawyer Rudy Giuliani, a former New York City mayor and top federal prosecutor, during the same rally suggested that the dispute over the election results be resolved by “trial by combat.”

The president later was angered to learn that Pence had said he would refuse to go along with Trump’s demand that he try to block the confirmation of Biden’s Electoral College victory.

More than an hour after the riot began, Trump’s spokeswoman Kayleigh McEnany said “the National Guard is on the way along with other federal protective services.”

“We reiterate President Trump’s call against violence and to remain peaceful,” McEnany said.

NBC News later reported that Trump had to be convinced to deploy the National Guard.

Pence, while trapped in the Capitol, was in contact with the Pentagon, and “encouraged a much more rapid deployment than what was occurring,” a source familiar with the matter said.

Acting Defense Secretary Chris Miller said he coordinated with Pence and congressional leaders to activate the National Guard and assist officers with taking back the Capitol. He did not mention any contact with Trump.

Biden, in a nationally television address, said, “At this hour, our democracy is under unprecedented assault.”

“It’s chaos, it borders on sedition and it must end now. I call this mob to pull back and allow this work of democracy to go forward,” Biden said.

“Therefore I call on President Trump to go on national television now to fulfill his oath and defend the Constitution, and demand an end to this siege,” the president-elect said.

Trump soon after released a video statement addressing the rioters at the Capitol, saying, “You have to go home,” but he repeated false claims about being swindled out of an electoral victory, and called his opponents “evil.”

The president later tweeted another message.

“These are the things and events that happen when a sacred landslide election victory is so unceremoniously & viciously stripped away from great patriots who have been badly & unfairly treated for so long. Go home with love & in peace,” Trump wrote.

Washington Mayor Muriel Bowser requested the deployment of the National Guard and issued a citywide 6 p.m. ET curfew until Thursday.

Pentagon spokesman Jonathan Hoffman said in an emailed statement: “The D.C. Guard has been mobilized to provide support to federal law enforcement in the District.”

He said acting Defense Secretary Christopher Miller was in contact with congressional leaders and Secretary of the Army Ryan McCarthy was working with the D.C. government.

“The law enforcement response will be led by the Department of Justice,” Hoffman said.

Northam later declared a state of emergency in Virginia, and curfews in the cities of Alexandria and Arlington, which are just across the Potomac River from Washington.

Acting U.S. Attorney General Jeffrey Rosen said in a statement, “The violence at our Nation’s Capitol Building is an intolerable attack on a fundamental institution of our democracy.”

Bowser during a press conference said, “The behavior that we are witnessing is shameful, unpatriotic and above all, it is unlawful.”

Lawmakers had just begun the procedural process of counting the Electoral College votes and formally declaring Biden the winner when the chaos erupted.

Trump, despite have told the crowd he would join them in the march to the Capitol, actually returned to the White House.

Trump slammed Pence on Twitter before calling on supporters to “Stay peaceful!”

Pence, in a tweet, said, “The violence and destruction taking place at the US Capitol Must Stop and it Must Stop Now. Anyone involved must respect Law Enforcement officers and immediately leave the building.”

“Peaceful protest is the right of every American but this attack on our Capitol will not be tolerated and those involved will be prosecuted to the fullest extent of the law,” Pence wrote.

McCarthy said he spoke to Trump and asked for his help to quell the protests.

Rep. Peter Welch, D-Vt., said in a tweet that “gas masks are being prepared.”

Sen. Ted Cruz, one of the Republicans leading the effort to challenge Biden’s victory through a series of objections to the results of individual state elections, said, “Violence is always unacceptable. Even when passions run high.”

“Anyone engaged in violence — especially against law enforcement — should be fully prosecuted,” Cruz tweeted. “God bless the Capitol Police and the honorable men & women of law enforcement who show great courage keeping all of us safe.”

Bill Barr, who resigned last month as attorney general after disputing Trump’s claims of widespread ballot fraud, said, “The violence at the Capitol Building is outrageous and despicable.”

“Federal agencies should move immediately to disperse it,” Barr said.

A member of Senate leadership told NBC News that senators are determined to stay until their work of counting the electoral votes is done.

The member said senators are considering continuing the count from the secure location where they are now located.

Former New Jersey Gov. Chris Christie, a Trump ally who has become critical of the president, said on ABC News, “The president caused this protest to occur. He’s the only one that can make it stop.” 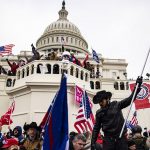 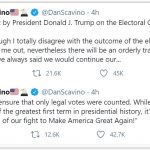