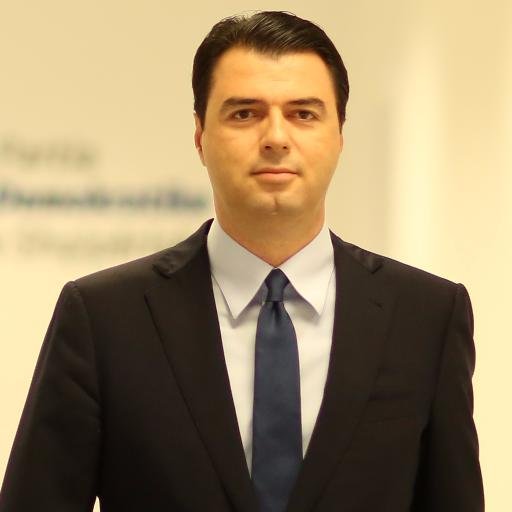 Basha was invited to come to the US by Congressional leaders to discuss the unfolding crisis in Albania and their concern that the present government of Albania is doing long-term damage to the US-Albania relationship.
The leader of the Albanian opposition said that democracy in his country is in great danger from the left-wing prime minister Edi Rama, who has allowed corruption and crime to flourish there.

“Albania is in a unique and difficult situation, in a political crisis, the results of a full onslaught of organized crime on all state structures, on the rule of law, and democracy,” said Lulzim Basha, the leader of the Democratic Party of Albania.

The 42 year old Basha, leader of the conservative Democratic Party, is a Netherlands-trained lawyer who as Foreign Minister oversaw Albania’s accession to NATO and as Minister of Interior won international praise for his harsh and effective fight against organized crime, which led the EU to lift travel visa requirements for Albanian citizens in 2010. He is considered a strong supporter of the US in the volatile Balkans.

“The problem of collusion between politics and crime is not new to the Balkans,” he said. “But, the unique problem for Albania is the outright promotion and presence of people with terrible criminal records, convicted in European Union states for offenses, such as drug trafficking, prostitution, human trafficking and other organized crime offenses.”

Criminal gangs and groups tied to terrorists operate pot farms and drug distribution and warehousing with immunity under the Rama government, he said.

Rama is known as a puppet of financier and international agent provocateur George Soros.

Basha said because he is attacking Soros’ influence in his country and he supports President Donald Trump, he is smeared by the Soros organization. “I have been viciously attacked by him and his people and also the international media because I am a Trump supporter.”

Rama served at a board member of the Soros Foundation in Albania and Soros funded a two-year project designed to politically transform the country in partnership with Harvard’s Kennedy School of Government.

“Over the past few months, elected officials and political leaders of foreign nations have been coming to me with disappointing news and reports of US activity in their respective countries,” Lee wrote. “This includes reports of diplomats playing political favorites, USAID funds supporting extreme and sometimes violent political activists, and the US Government working to marginalize the moderates and conservatives in leadership roles.”

The Albanian Prime Minister is known as the most adamantly anti-Trump leader in Europe, telling CNN is 2016 that the U.S. President is a “menace to society and disgrace to civilization.” He also compared his political rival Basha to the U.S. President, telling the Voice of America “I believe that those who choose Trump in Albania are to be pitied. If I were to choose between Basha and Trump, I would choose Basha, and I never choose Basha and it is not my problem if Lulzim Basha, or anybody else, chooses Trump over me. This would be their problem.”

While he was in Washington, Basha met with California Republican Rep. Dana Rohrabacher, a Chairman of the Europe subcommittee of the House Foreign Affairs Committee, who arranged a briefing for Members of Congress.
Rohrabacher, who was on Donald Trump’s short list to become U.S. Secretary of State, said he admired the patriotism and zeal he found in Basha.

“There is reason for apprehension about what’s going on in the Balkans,” said the former speechwriter for President Ronald W. Reagan. “Stability in that part of Europe is dependent on a stable and functioning Albania. There is serious concern about the corruption, drug trade and terrorism in this important nation.”

The congressman said Albania is on the front lines in the battle against radical Islam. “If we are going to defeat radical Islam and have a stable Europe, we need someone who can get the job done. Lulzim Basha, whom I have known for some time, is just the person to get that job done.”

Basha said his message to the American people is that they have invested tremendously in to support a democratic, free, and open Albania for the last the past 27 years.

“I am pleading for help from the United States to help us preserve that investment, so we can live up to our responsibilities as a NATO member,” he said.