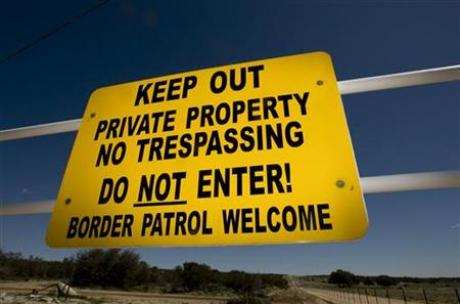 (Reuters) – The U.S. government is pulling $50 million in funding from a problematic “virtual fence” meant to secure stretches of the Mexico border and is freezing additional funding for the project pending review, authorities said on Tuesday.

Homeland Security Secretary Janet Napolitano said an allocation of $50 million in funds made under the Recovery Act would be taken away from the ill-starred SBInet program, which seeks to mesh video cameras, radar, sensors and other technologies into a high-tech system to detect smugglers.

Napolitano said the project, which started in 2006 and was being developed by Boeing Co, has been beset by technical problems, missed deadlines and cost overruns.

“Effective immediately, the Department of Homeland Security will redeploy $50 million of Recovery Act funding originally allocated for the SBInet … to other tested, commercially available security technology along the Southwest border,” she said.

The SBInet program is focused on securing the areas between the ports-of-entry on the Mexico border. Its goal is to integrate new and existing technologies to enable federal border police to detect and respond to incursions at the border.

Criticism has centered on the project’s development of costly new systems instead of using available off-the-shelf technologies, as well as insufficient consultation with border police in its development, among other issues.

She said the department also had frozen all funding beyond SBInet’s initial deployment to two areas south of Tucson and Ajo, Arizona, pending completion of an assessment ordered in January.

Sen. John McCain, an Arizona Republican and a long-term critic of the SBInet program, on Tuesday welcomed Napolitano’s decision to divert funding from the program.

“After spending over $1 billion of taxpayers’ dollars on a failed system of sensors and cameras along the Southwest border … I am pleased that Secretary Napolitano has decided to instead turn to commercial available technology that can be used to immediately secure our border from illegal entries,” he said in a statement.

“I have been calling for congressional oversight and administrative action on this issue since it became clear that SBInet was a complete failure.”

Each year, Mexican smugglers haul thousands of tons of illegal drugs and guide hundreds of thousands of undocumented migrants across the U.S. border, many through the heavily trafficked desert corridor south of Tucson.

The government announced last year it had begun building the two new stretches of the virtual fencing covering a total of 53 miles at a cost of about $100 million. The system sought to use tower-mounted radars, cameras and other sensors to spot smugglers crossing from Mexico.

Officials said at the time that, should it be accepted by the Border Patrol, the project could be extended across the southwest border — with the exception of the Border Patrol’s Marfa, Texas, sector — by 2014 for an estimated $6.7 billion