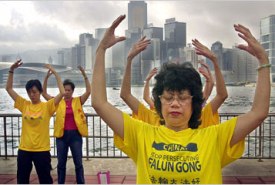 (CNSNews.com) – The U.S. government has spent $410,625 to study the effects of teaching Chinese meditation to cocaine addicts.

â€œOur clinical experience and pilot studies suggest that Integrative Meditation (IM) from Chinese medicine may help clients engage in treatment, reduce cravings/withdrawal symptoms, and increase treatment retention, which appear missed by a typical behavior therapy,â€ says the official description of the project published by the National Institutes of Health.

â€œThe specific aims,â€ of the study, according to the NIH description, â€œinclude: (1) To conduct a pilot randomized controlled trial of 66 outpatient cocaine users with 12 weekly facilitation meetings to assess feasibility of recruiting and retaining cocaine addicts, and to determine effect size of IM-augmented treatment in comparison with Non-directive therapy (NT) control, with both groups receiving standard treatment as usual (TAU), (2) To examine the changes in attention networks and negative mood as possible mediators of treatment outcomes between the two groups.â€

CNSNews.com asked both the NIH and the principal investigator for the study–Dr. Kevin Chen of the University of Maryland-Baltimore–the following question: â€œAccording to the Census Bureau, the median household income in the United States is $52,000. How would you explain to the average American mom and dad–who make $52,000 per year–that taxing them to pay for this grant was justified?â€

Neither Chen nor the NIH responded to this question. NIH spokeswoman Shirley Simpson requested the question in an e-mail. After more than a week, however,Â she still had not responded to the email. Chen also did not respond to a second, follow-up email with the same question.

When asked for more information on the meditation technique, however, Chen sent CNSNews.com a document describing the Chinese Integrative Meditation used in the study.