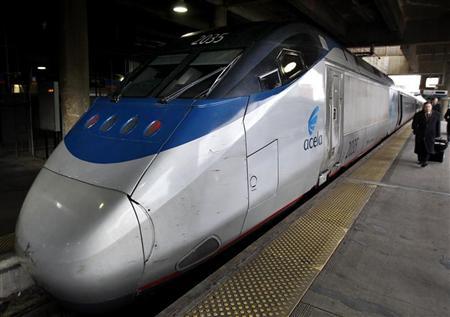 Biden, who estimated he has ridden Amtrak between Washington and his home in Wilmington, Delaware, some 7,900 times, made a strong pitch for rail transportation to enable the United States to compete and lead internationally.

“This is about seizing the future,” he said, making the announcement at Philadelphia’s busy 30th Street station with U.S. Transportation Secretary Ray LaHood.

Japan and China are already building high-speed rail, and “there’s no reason, none,” that the United States cannot do the same, Biden said.

“If we do not, you tell me how America is going to be able to lead the world in the 21st century.”

Under the initiative, the Department of Transportation will choose corridors for new projects and increase U.S. use of the passenger rails.

President Barack Obama’s budget for fiscal year 2012, to be unveiled next week, includes $8 billion for the plan. The rest of the money would be allocated over the six-year time period.

Obama has said he wants to target investments in areas such as infrastructure while reducing spending to tackle the budget deficit.

The announcement comes when some Republicans in Congress are seeking to cut $2.5 trillion from federal spending over the next decade, including steep cuts in transportation.

Biden noted Obama’s goal to give 80 percent of Americans access to high-speed rail within 25 years, announced during his State of the Union address last month.

Advocates say U.S. investment in high-speed rail lags many other countries and point to China, which plans to invest $451 billion to $602 billion in its high-speed rail network between 2011 and 2015, according to the China Securities Journal. (Additional reporting byÂ Jeff Mason in Washington; Editing byÂ Ellen Wulfhorst andÂ Jerry Norton)