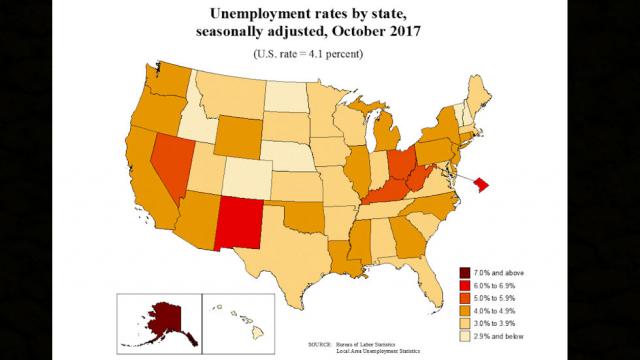 Thirteen states this year have seen their unemployment rates drop to the lowest levels ever recorded since the federal government began keeping track of state-level data more than four decades ago.
Eight years after the bottom of the worst recession in modern history, the states seeing economic booms range from the bluest of the blue, like Hawaii and California, to the deepest shades of red, like Idaho and Texas.
In October, the unemployment rates in Alabama, Hawaii, Maine, Mississippi, Tennessee, Texas and Washington all met or beat their lowest rates ever recorded by the Bureau of Labor Statistics (BLS), according to the agency’s monthly report issued Friday.
California, Colorado, Idaho, North Dakota and Oregon also hit new lows earlier this year.
Read the full article: http://thehill.com/homenews/state-watch/360916-unemployment-rate-hit-record-low-in-13-states-this-year