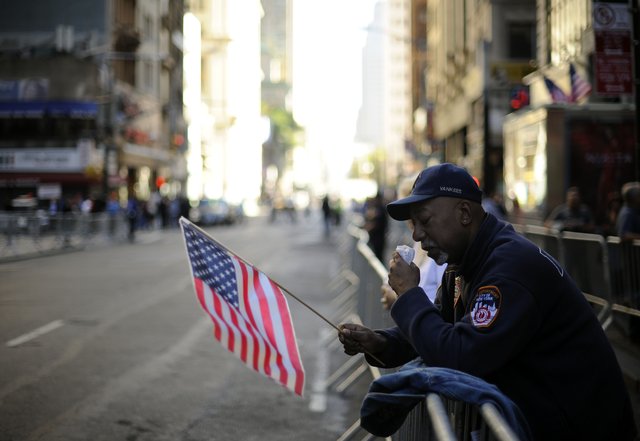 NEW YORK (AP) â€” Rites of remembrance and loss marked the ninth anniversary of the Sept. 11 attacks, familiar in their sorrow but observed for the first time Saturday in a nation torn over the prospect of a mosque near ground zero and the role of Islam in society.

Under a flawless blue sky that called to mind the day itself, there were tears and song, chants, and the waving of hundreds of American flags. Loved ones recited the names of the victims, as they have each year since the attacks. They looked up to add personal messages to the lost and down to place flowers in a reflecting pool in their honor.

For a few hours Saturday morning, the political and cultural furor over whether a proposed Islamic center and mosque belongs two blocks from the World Trade Center site mostly gave way to the somber anniversary ceremony and pleas from elected officials for religious tolerance.

But this Sept. 11 was unmistakably different from the eight that came before it, and not only because a new World Trade Center is finally ready to rise. As they finished reading names, two relatives of 9/11 victims issued pleas â€” one to God and one to New York â€” that the site remain “sacred.”

And within hours of the city’s memorial service near ground zero, groups of protesters had taken up positions in lower Manhattan, blocks apart and representing both sides of the debate over the mosque, which has suffused the nation’s politics for weeks leading up to the anniversary.

Near City Hall, supporters of the mosque toted signs that read, “The attack on Islam is racism” and “Tea Party bigots funded by corporate $.” Opponents carried placards that read, “It stops here” and “Never forgive, never forget, no WTC mosque.”

At the other Sept. 11 attack sites, as at ground zero, elected leaders sought to remind Americans of the acts of heroism that marked a Tuesday in 2001 and the national show of unity that followed.

President Barack Obama, appealing to an unsettled nation from the Pentagon, declared that the United States could not “sacrifice the liberties we cherish or hunker down behind walls of suspicion and mistrust.”