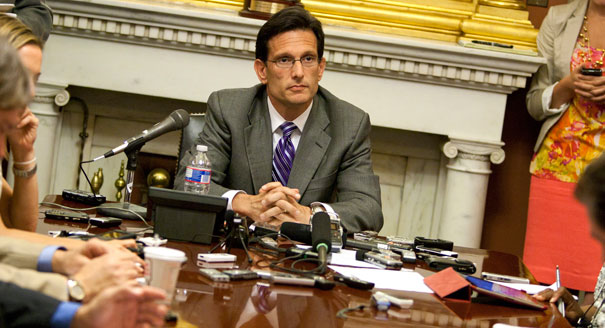 A day ahead of a meeting between PresidentÂ Obama and congressional leaders to discuss raising the nationâ€™s debt ceiling, House Majority LeaderÂ Eric Cantor on Wednesday said he would be willing to accept ending some tax breaks as part of a compromise.

But the Virginia Republican said that closing any tax loopholes must be offset with spending cuts elsewhere, an offer rebutted by a key Senate Democrat.

â€œI have said from day one, we are not for tax hikes on the American people or businesses, and if the president wants to talk loopholes, weâ€™ll be glad to talk loopholes,â€Â Mr. Cantor said during his weekly briefing with reporters at the Capitol.

â€œWe are not for any proposal that increases taxes, and any type of discussion [regarding loopholes] should be coupled with offsetting tax cuts somewhere else.â€

Mr. Cantor wouldnâ€™t say what kind of loopholes he would target. Yet his comments were noteworthy because he previously had suggested he wouldnâ€™t support closing tax loopholes as part of an agreement to raise the nationâ€™s $14.3 trillion debt ceiling.

But Democrats insist that any revenue earned through ending tax breaks be used to pay down the nationâ€™s debt.

â€œIf Republicans are going say we can only close these loopholes in a revenue-neutral way, it is like taking one step forward and then two steps back,â€ saidÂ Sen. Charles E. Schumer, New York Democrat. â€œThe point isnâ€™t to get rid of these loopholes simply to pay for new tax breaks elsewhere, itâ€™s to do it in a way that contributes to the reduction of the debt.â€

All sides of the debate stress a need to increase the nationâ€™s debt ceiling â€” the legal limit the federal government can borrow to pay for its operations and debt obligations.

Exceeding the limit could lead to a U.S. default on its loans, a scenario that would damage the nationâ€™s credit rating and trigger another financial crisis.

Time is slipping away for getting a deal worked out. Treasury Secretary Timothy F. Geithner says the debt limit must be increased by Aug. 2 or the government risks defaulting on its loans, a scenario he says could trigger another financial crisis.

Republican leaders, pressed by a large contingent of tea party-backed members, have demanded that any deal include spending cuts to equal the amount the ceiling is raised â€” at least $2 trillion.

Mr. Obama on Wednesday reiterated the Democratsâ€™ position that any deal include ending certain tax breaks for wealthy corporations. He also wants more than just a $2 trillion drop in the deficit.

â€œThe debt ceiling should not be something that is used as a gun against the heads of the American people to extract tax breaks for corporate jets owners or oil and gas companies that are making billions of dollars,â€ the president said during an online â€œtown hallâ€ event on the Twitter social network.