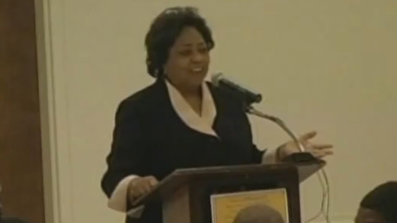 Days after the NAACP clashed with Tea Party members over allegations of racism, a video has surfaced showing an Agriculture Department official regaling an NAACP audience with a story about how she withheld help to a white farmer facing bankruptcy — video that now has forced the official to resign.

Shirley Sherrod, the department’s Georgia director of Rural Development,Â is shown in the clip describing “the first time I was faced with having to help a white farmer save his farm.” Sherrod, who is black, claimed the farmer took a long time trying to show he was “superior” to her. The audience laughed as she described how she determined his fate.

“He had to come to me for help. What he didn’t know while he was taking all that time trying to show me he was superior to me was I was trying to decide just how much help I was going to give him,” she said. “I was struggling with the fact that so many black people have lost their farmland and here I was faced with having to help a white person save their land — so I didn’t give him the full force of what I could do. I did enough.”

The Agriculture Department announced Monday, shortly after FoxNews.com published its initial report on the video, that Sherrod had resigned.

“There is zero tolerance for discrimination at USDA, and I strongly condemn any act of discrimination against any person,” Agriculture Secretary Tom Vilsack said in a written statement. “We have been working hard through the past 18 months to reverse the checkered civil rights history at the department and take the issue of fairness and equality very seriously.

Sherrod explained in the video that, at the time, she assumed the state or national Department of Agriculture had referred the white farmer to her. In order to ensure that the farmer could report back that she was indeed helpful, she said she took him to see “one of his own” — a white lawyer.

“I figured that if I take him to one of them, that his own kind would take care of him,” she said.

The point of the story wasn’t entirely clear; only an excerpt of the speech is included in the video clip.

“It was revealed to me that it’s about poor versus those who have,” she said, suggesting she had learned that race is less important.

The video clip was first posted by BigGovernment.com. The clip is dated March 27 from an NAACP Freedom Fund banquet.