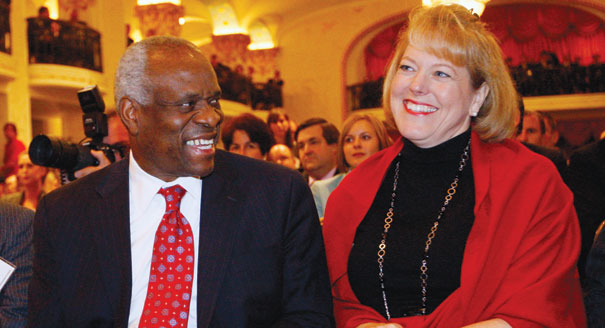 She started as a congressional aide in the 1980s, became a midlevel Republican operative, then briefly left politics,Â reemerging in 2009 as founder of a tea party group, beforeÂ steppingdown amid ‘continued questions about whether her actions were appropriate for the spouse of a Supreme Court justice.

Now, Virginia â€œGinniâ€ Thomas, wife of Justice Clarence Thomas, has recast herself yet again, this time as the head of a firm, Liberty Consulting, which boasts on itsÂ website using her â€œexperience and connectionsâ€ to help clients â€œwith â€œgovernmental affairs effortsâ€ andÂ political donation strategies.

Thomas already has met with nearly half of the 99 GOP freshmen in the House and Senate, according to an e-mail she sent last week to congressional chiefs of staff, in which she branded herself â€œa self-appointed, ambassador to the freshmen class and an ambassador to the tea party movement.â€

But her latest career incarnation is sparking controversy again.

Thomasâ€™s role as a de facto tea party lobbyist and â€” until recently â€” as head of a tea party group that worked to defeat Democrats last November â€œshow a new level of arrogance of just not caring that the court is being politicized and how that undermines the historic image of the Supreme Court as being above the political fray,â€ said Arn Pearson, a lawyer for Common Cause, the left-leaning government watchdog group.

â€œIt raises additional questions about whether Justice Thomas can be unbiased and appear to be unbiased in cases dealing with the repeal of the health care reform law or corporate political spending when his wife is working to elect members of the tea party and also advocating for their policies.â€

Even among congressional Republicans, with whom Thomas boasts she has close ties, the reaction to the entreaties from her new firm, Liberty Consulting ranged from puzzlement to annoyance, with a senior House Republican aide who provided Thomasâ€™s e-mail to POLITICO, blasting her for trying to â€œcash inâ€ on her ties to the tea party movement.

â€œThis is the spouse of Justice Thomas?â€ he said, when asked by POLITICO on Tuesday about her outreach. â€œNo, Iâ€™ve never met her. Itâ€™s not something Iâ€™ve heard about. And I hang out with a lot of freshman,â€ he said.

While Thomas wasÂ well-known in conservative circles as an aide