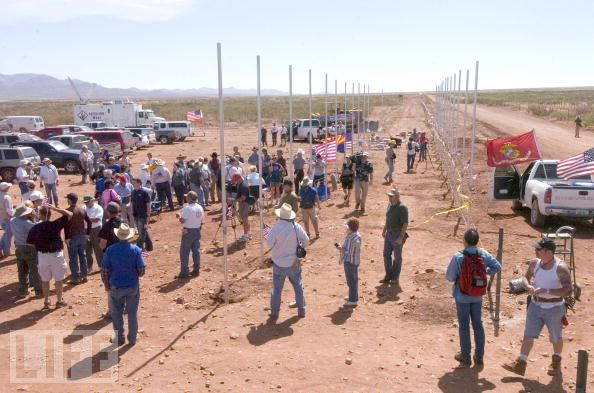 The Minuteman Civil Defense Corps, which posted hundreds of civilian volunteers along the U.S.-Mexico border over the past five years, has disbanded, citing what it called “rising aggression” in the country and decisions by lawmakers in Washington who have “pushed amnesty down our throats.”

“The mental attitude of many Americans is turning meaner â€¦ and we are concerned that this could cause problems,” MCDC President Carmen Mercer told The Washington Times on Monday. “You see aggression surfacing even at the tea party marches. We just did not want to deal with the liability anymore.

“We have to protect the ranchers as well as the volunteers,” Ms. Mercer said, noting the killing on Saturday of Robert Krentz, a prominent Douglas, Ariz., rancher who was shot along with his dog on his ranch by a suspected illegal immigrant who fled into Mexico and remains a fugitive.

Born in April 2005, the MCDC â€” originally known as the Minuteman Project â€” called for the U.S. military to be assigned to protect the southwestern border from terrorists, illegal immigrants and drug smugglers; sought increased manpower for the U.S. Border Patrol; and opposed the granting of amnesty to the millions of illegals who already have entered the country.

The MCDC vowed to fight a proposal by President Obama to try to get a bipartisan immigration bill passed this year that would establish a path to legal status for the estimated 11 million illegal immigrants in the country.

At one point, the organization had a roster of about 12,000 members. In May 2005, then-U.S. Customs and Border Protection (CBP) Commissioner Robert C. Bonner praised the Minuteman movement, saying it was aiding the effort to prevent terrorists and terrorist weapons from entering the country by reducing the flow of illegal immigrants and disrupting smuggling operations.

Mr. Bonner said the volunteers brought significant press attention to the issue of illegal immigration and proposed that the government work with the Minutemen in patrolling the border.

Within days, the Department of Homeland Security rejected the proposal outright, saying it wasn’t going to happen.

The MCDC announcement that it was dissolving came as a surprise to many in the movement, particularly in light of pronouncements by Ms. Mercer earlier this month that the organization was looking for more volunteers this year to show up on the border “locked and loaded.”

“This muster will be completely different. â€¦ We return to the border locked, loaded and ready to stop each and every individual we encounter along the frontier that is now more dangerous than the frontier of Afghanistan,” she said in a March 16 posting on the MCDC Web site. “This operation will not be for the faint of heart.”