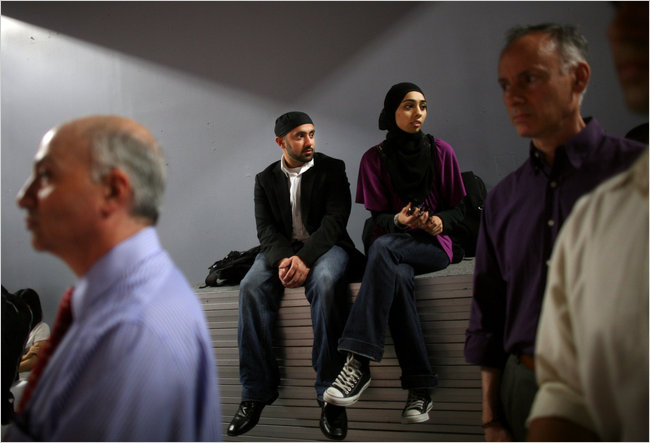 After a raucous hearing, a Manhattan community board backed a proposal on Tuesday evening to build a Muslim community center near the World Trade Center.

The 29-to-1 vote, with 10 abstentions, followed a four-hour back-and-forth between those who said the community center would be a monument to tolerance and those who believed it would be an affront to victims of the 2001 terrorist attacks.

The boardâ€™s vote was advisory â€” it did not have the power to scrap plans for a center â€” but it was seen as an important barometer of community sentiment.

Middle school students and rabbis were among the more than 100 people who testified at the hearing, which was held a short distance from ground zero. Some carried pictures of family members killed in the attacks; others brandished signs reading â€œShow respect for 9/11. No mosque!â€

C. Lee Hanson, 77, whose son Peter was killed in the attacks, said he opposed the center not because he was intolerant, but because he believed that building a tribute to Islam so close to the World Trade Center would be insensitive.

â€œThe pain never goes away,â€ Mr. Hanson said. â€œWhen I look over there and I see a mosque, itâ€™s going to hurt. Build it someplace else.â€

Jean Grillo, 65, a writer from TriBeCa, said shutting out any faith undermined American values. â€œWhat better place to teach tolerance than at the very area where hate tried to kill tolerance?â€ she said.

The proposed center, called the Cordoba House, would rise as many as 15 stories two blocks north of where the twin towers stood. It would include a prayer space, as well as a 500-seat performing arts center, a culinary school, a swimming pool, a restaurant and other amenities.

The group behind the project, theÂ Cordoba Initiative, is seeking to make major structural changes to the five-story building at 45 Park Place, which was built in the late 1850s in the Italian Renaissance palazzo style.