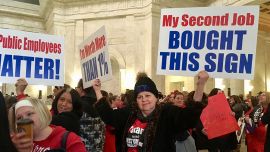 All public schools in West Virginia were shuttered Thursday as teachers geared up to strike for better wages and health insurance options — even as Gov. Jim Justice signed a bill to raise teacher pay.

Still, dozens of teachers were gathering outside schools Thursday, ready to travel to Charleston, WV, to attend a rally outside of the capitol building, WSAZ reported.

On the eve of the impending strike, Justice, a Republican, signed a bill into law that would raise pay for teachers and state employees. The employees will receive a two percent raise in the upcoming year and a one percent raise next year, according to the Charleston Gazette-Mail.

Justice said it’s important to keep both teachers and kids in the classroom.