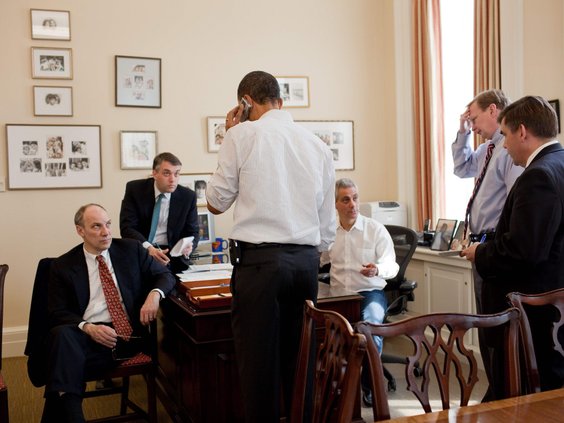 Late last year, President Obama put a delicate question to the highest-ranking women on his staff at a private White House dinner: Should he be worried about a nagging perception that his administration was a testosterone-fueled boys’ club?

The dinner led to the formation of an informal group of women at the White House – a women’s club of sorts – to help female aides navigate the upper echelons of the administration.

The boys’ club story line had been around since the days of the Obama presidential campaign, which was run by a tight inner circle of mostly male advisers, many of whom came with Mr. Obama to the White House.

Women fill several top jobs in the White House. Senior adviser Valerie Jarrett, a longtime friend of the president, is considered one of his closest aides. Melody Barnes oversees Mr. Obama’s domestic agenda. And Nancy-Ann DeParle runs the White House health care policy team, a position that aides say has put her in closer contact with the president than nearly anyone else in the administration.

Still, more than a year into Mr. Obama’s term, the most recognizable faces of the administration, the people the president is most often seen huddling with in the Oval Office and the Situation Room, are men, most notably, White House press secretary Robert Gibbs and senior adviser David Axelrod, along with chief of staff Rahm Emanuel, who joined the Obama team after the election.

“It’s cemented a perception that isn’t based in reality,” said Anita Dunn, the former White House communications director who now serves as an outside adviser for the administration.

The boys’ club image gained currency from a slew of men-only basketball games and rounds of golf hosted by the admittedly sports-obsessed Mr. Obama, which drew criticism from women’s advocates.