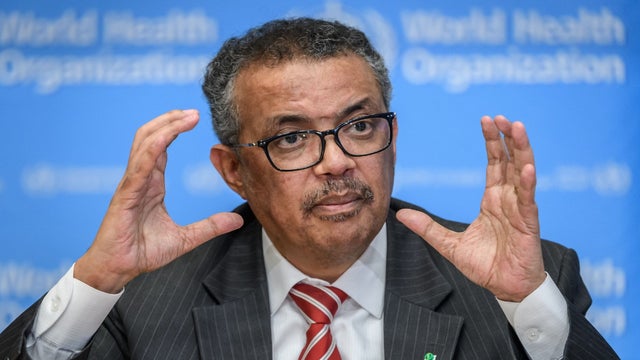 The World Health Organization’s (WHO) director-general on Wednesday warned world leaders against politicizing the novel coronavirus after President Trump threatened to cut off funding to the organization due its handling of the outbreak.

Tedros urged countries to work together to respond to the virus, which has infected more than 1.4 million people and caused roughly 83,000 deaths worldwide, according to a Johns Hopkins University database.

“Without unity, we assure you even any country that may have a better system will be in trouble and more crisis. That’s our message. Unity at the national level,” he said. “No need to use COVID to score political points. No need. You have many other ways to prove yourselves.”

The comments came just a day after Tump repeatedly targeted the WHO and China over their early response to COVID-19, claiming the WHO, a United Nations body responsible for international public health, seemed “very biased toward China.”

China has been accused of downplaying the threat of the coronavirus, which is thought to have originated in the city of Wuhan in December.

Trump said that he’d consider a pause of U.S. funding in response. The U.S. is one of the world’s biggest financial contributors to WHO.

“They actually criticized and disagreed with my travel ban at the time I did it, and they were wrong,” Trump said at a press conference on Wednesday, referencing his decision to block incoming travel from China. “They’ve been wrong about a lot of things.

“They had a lot of information early, and they didn’t — they seemed to be very China-centric. We have to look into it,” he added.

Tedros noted that with unity at a global level, resources would not be a problem for WHO. He said that he expected the U.S. to continue contributing to the organization and thanked the nation for its “generous support so far.”

During his Wednesday remarks, Tedros also noted that Thursday will mark 100 days since WHO was notified about the first cases involving a “pneumonia with unknown cause” in China. WHO in late January announced the virus to be a public emergency of international concern, before declaring it a pandemic on March 11.