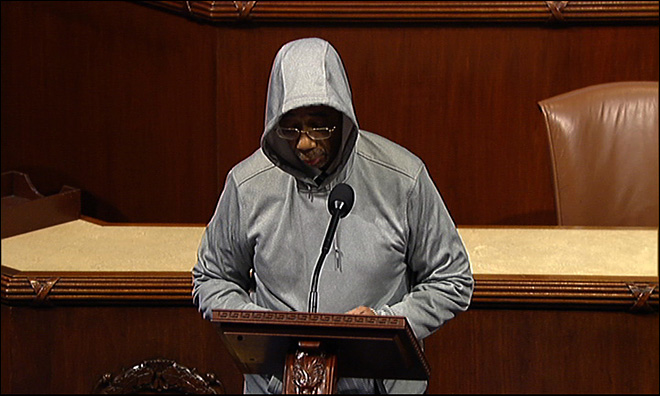 Hoodies on the House floor areÂ verboten, apparently.Â Rep. Bobby Rush (D)Â ofÂ IllinoisÂ was scolded and escorted from the chamber of theÂ House of RepresentativesÂ on Wednesday morning, when he attempted to give a speech on the need for a full investigation of theÂ Trayvon MartinÂ shooting while wearing sunglasses and a gray hooded sweat shirt.

â€œRacial profiling has to stop, Mr. Speaker,â€ said Representative Rush while doffing his suit jacket to reveal his hoodie garb. â€œJust because someone wears a hoodie does not make them a hoodlum.â€

Rush continued to speak while the presiding officer, Rep. Gregg Harper (R) ofÂ Mississippi, banged the gavel, ordering him to desist. Eventually someone from the office of the House sergeant-at-arms appeared and escorted Rush, hoodie and all, off the floor.

The reason for the uproar is that Congress has a dress code. Men are expected to wear coats and ties, and women to wear correspondingly serious clothing. UnderÂ House Rule XVII, Section 5, hats are prohibited, and a hoodie is unquestionably a head covering.

â€œThe Sergeant-at-Arms is charged with the strict enforcement of this clause,â€ concludes that section.

SeniorÂ DemocratsÂ played down the kerfuffle. Minority leaderÂ Nancy PelosiÂ noted that when she first came to Congress, women were prohibited from wearing pants on the floor. But really, why should the House be such a stickler on items of dress? In the 1830s and 1840s â€“ admittedly, a much more heated era in US history â€“ many lawmakers carried weapons, and violence was not uncommon. In some Asian legislatures today, debates can end in fistfights.

The reason for the rules on decorum may be that civility stands on a slippery slope.