Why the Donald still matters in prez race 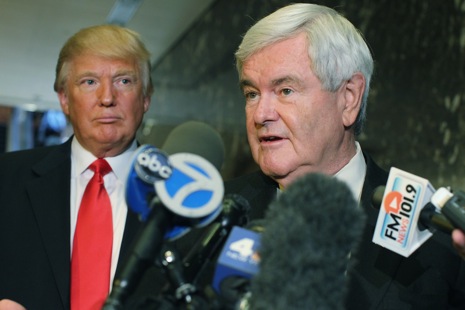 The Donald isnâ€™t done with this presidential primary yet.

But itâ€™s not exactly about him this time. Yesterday morning, it was about GOP front-runners Newt Gingrich andÂ Mitt Romney. Donald Trump had just met Gingrich in New York when he took a call from the Herald.

â€œNewtâ€™s been a rocket ship for the past couple of weeks,â€ Trump said.

Trump likes anything that is trending upward, especially if it is someone who might beat President Obama. But donâ€™t expect Trump to launch a Gingrich endorsement anytime soon. First off, Trump is moderating a Newsmax.com/ION TV debate Dec. 27 in Iowa. And Trump added, he likes Romney, too. And though recent polls put Newt on top of Romney nationally and in Iowa, Trump said he doesnâ€™t think the Republican Party can go wrong with either.

â€œWell, I like both of them very much. Mitt is a friend of mine and Newt is a friend of mine. Theyâ€™re very different in a lot of ways,â€ Trump said. â€œItâ€™s surprising a little bit that Mitt doesnâ€™t gain more, as he will be the first to tell you.â€

And, if everything blows up, Trump also isnâ€™t ruling out the idea of a last-minute third-party candidate. Which could even be … himself.

â€œThere is a possibility, you know,â€ Trump said. He added, â€œIâ€™m going to be endorsing somebody, hopefully itâ€™ll be the right person.â€

Heâ€™s also buddies with some of the other candidates, which along with his bullish, brazen, no-nonsense reality TV style should make for fun viewing when he moderates his pals ahead of the Iowa caucuses. Because itâ€™s impossible to imagine Trump hosting even a presidential debate without figuring out some way to make it about himself.

The impressively coiffed real estate mogul is equal parts reality TV star and money-making genius. And according to his new book, â€œTime To Get Tough: Making America No. 1 Again,â€ heâ€™s worth $7 billion in assets, with $300 million in ready cash.

But back to the debate. Trump says it will focus on important but thus-far largely neglected issues, matters he says he understands very well.

â€œWell, I think weâ€™re going to talk about outside forces and what the world is doing to us, including OPEC and China and other countries and I think thatâ€™s important because theyâ€™re stealing our wealth,â€ Trump said.

â€œAnd weâ€™ll talk about other things that havenâ€™t been talked about so much. But we will be talking about lots of different things, some of which have not been discussed and are very important,â€ Trump added.

Unfortunately, before he could elaborate on what exactly all those important issues are, time was up.