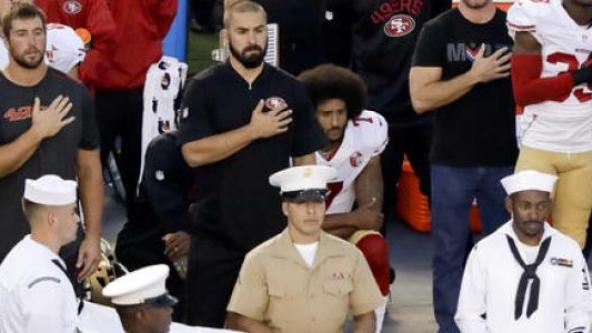 Kaepernick and Reid dropped to one knee while a naval officer sang “The Star-Spangled Banner” and dozens of military members unfurled an oversized flag at the Chargers’ Qualcomm Stadium.

Kaepernick and Reid received scattered boos when they dropped to a knee amid a crowd of teammates, but the protest was otherwise unremarked by the San Diego crowd. The 49ers’ visit coincided with the annual Salute to the Military preseason game for the Chargers, who have strong fan support in their city’s extensive armed forces community.

Kaepernick got much heavier boos when he took the field to start the game for the 49ers and immediately led them on a 16-play, 85-yard touchdown drive. The veteran quarterback is attempting to regain the starting job that he lost last season, and he likely helped his cause with a 103-yard passing performance while playing the entire first half in the 49ers’ 31-21 victory over the Chargers.

Kaepernick’s protest has dominated the public discussion of the nation’s most popular sport this week, and his stance has been met with equally passionate condemnation and support. His refusal to stand for the anthem first came to public notice last week when he remained seated on the 49ers’ bench before a preseason game against Green Bay.