A Fourth of July Without Fireworks? 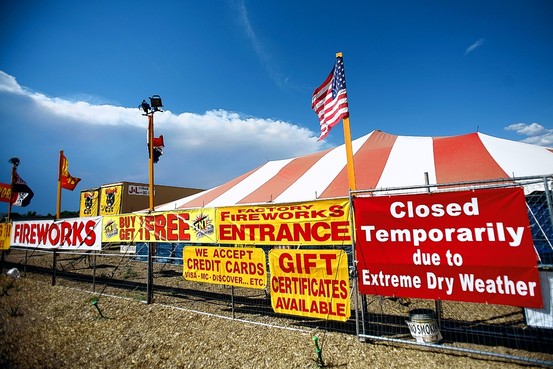 By SHALINI RAMACHANDRAN and ANA CAMPOY, The Wall Street Journal

This July Fourth holiday could be dimmer than usual across the South after officials imposed bans on the sale and use of fireworks amid persistent drought and some of the worst wildfires in recorded history.

Officials from Florida to Arizona have prohibited the use of fireworks to reduce the risk of more wildfires. They are also asking counties and residents where bans aren’t in place to give up holiday displays.

New Mexico Gov. Susana Martinez on Wednesday ordered state police officers to help enforce bans and restrictions put in place across parts of the state. “The conditions in New Mexico are simply too dangerous for anyone to buy, sell or use fireworks this summer,” she said in a statement.

The Texas Department of Public Safety on Tuesday pleaded with counties, cities and citizens to forgo fireworks. So far, 179 of Texas’s 254 counties have banned fireworks, according to Gov. Rick Perry’s office.

“It’s just too dry, and our firefighting resources are stretched too thin to be able to cope with potentially massive outbreaks of fires caused by fireworks,” said Steven McCraw, the public safety department’s director.