After debate surge, Kamala Harris tries to avoid another slump 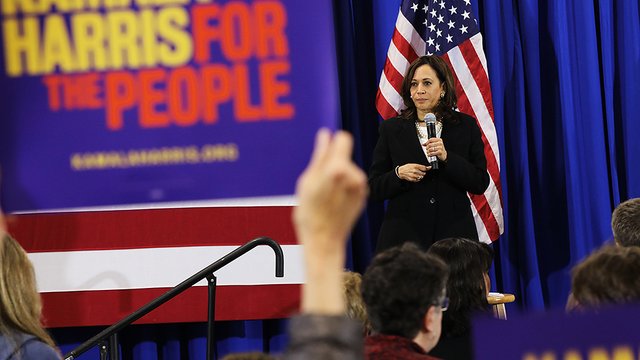 Kamala Harris is surging in early 2020 primary election polls after her performance during the first Democratic National Committee debate series in Miami.

The first-term senator for California, 54, was languishing in fifth place before 20 candidates vying for the right to challenge President Trump next year walked out onto the debate stage last week, according to public opinion research. But after her provocative confrontation with Joe Biden over his opposition to busing, a policy aimed at encouraging integration after the 1954 Brown v. Board of Education Supreme Court decision, and his positive recollections of working with segregationists in the Senate during the 1970s, a CNN poll released Monday ranks her second behind the former vice president, leapfrogging over rivals Bernie Sanders, Pete Buttigieg, and Elizabeth Warren.

The former California state attorney general and San Francisco district attorney leveraged her performance in the debate into a $2 million fundraising haul, buttressed in part by “That little girl was me” merchandise promoting her story about the toll Biden’s stance against busing took on her as a biracial child growing up in Oakland, California. Her campaign for the White House has also picked up a slew of endorsements since Miami.

Harris hasn’t attracted this magnitude of glowing press coverage since she announced her presidential bid in January on the steps of Oakland City Hall before 20,000 people, the largest audience convened for a 2020 announcement, raising $12 million during the first quarter of the year. Yet in the intervening months, the Howard University and University of California, Hastings law school graduate has been outshone on the trail by contenders such as Warren, a Massachusetts senator who’s similarly built momentum on the back of town halls and legislative proposal roll-outs.