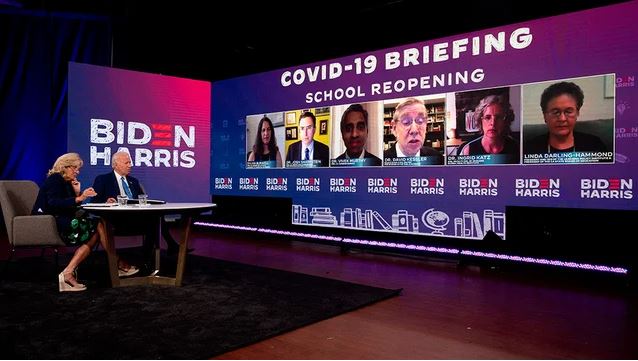 Joe Biden on Wednesday sought to shift the national political conversation back to the coronavirus, an issue he and his campaign thinks will sink President Trump’s reelection effort.

Biden for the last week has mostly spent his time pushing back on Trump’s claims that Democrats are to blame for sometimes violent protests in places like Portland, Ore. and Kenosha, Wis.

It was an effort that came after Democrats worried he was ceding ground to Trump on an issue the White House prefers to be central to the fall campaign.

The shift back to the coronavirus was an effort by Biden to go back on offense, and put Trump on defense over his handling of the pandemic.

“Talk about it every day,” Setzer said. “Every part of our lives has been affected dramatically by COVID — our health, our families, our jobs — and Donald Trump would like to pretend it doesn’t exist.

“Don’t let him,” she cautioned.

Biden and Democrats see COVID-19 as the issue that will cost Trump a second term, and they want to make sure the focus stays on the issue even as they say Trump will seek to change the topic.

“Trump doesn’t want to talk about it so it’s imperative upon Biden and Harris to be talking about this in some form every single day,” said one Democratic strategist, referring to the Democratic nominee and his running mate, Sen. Kamala Harris (D-Calif.).

“It’s more important now than ever as it begins to fade from the headlines,” the strategist said.

“Let me be clear: If President Trump and his administration had done their jobs, America’s schools would be open,” Biden said in a speech from his hometown of Wilmington, Del. “Protecting our students, our educators, and our communities. Getting our schools open safely and effectively—this is a national emergency.”

Responding to Biden’s remarks, Trump communications director Tim Murtaugh tried to shift back to the president’s “law and order” message, saying the Democratic nominee failed to talk about condemning Antifa “or call the rioters in our cities what they are: left wing criminals aligned with the most extreme elements of the Democrat Party.”

Biden has sought to paint a contrast with Trump on the coronavirus, which was one of the major themes of the Democratic National Convention.

Polls show a majority of voters disapprove of Trump’s handling of the pandemic, which ruptured the economy and has killed more than 180,000 people in the United States.

The coronavirus remains inescapable: Professional sports are playing without spectators, many movie theaters are closed, colleges are opening in many cases to freshmen only and millions remain out of work.

A Reuters-Ipsos poll on Wednesday found that 79 percent of those surveyed are “very” or “somewhat” concerned about the coronavirus. Almost 60 percent said Trump is at least partly responsible for school and business closures as well as the number of cases in the country soaring to more than six million.

In late March, as the disease began to spread around the US, Biden held a two-point lead over Trump nationally. But two polls released on Wednesday found Biden with a double-digit lead. It’s an advantage both parties largely link to the coronavirus.

Democratic strategist Eddie Vale said all of this gives Biden a tremendous advantage, even as Trump and the GOP try to make the election about other issues.

“If you are trying to work while your kids can’t go to school, and your friends, family and neighbors are getting sick and dying, Trump babbling about Antifa…is going to make you forget that?” Vale said.

Biden has sought to draw a contrast with Trump, in part by campaigning from home to underscore how seriously he took the virus.

Throughout the spring and summer, that ceded ground to Trump in a way that seemed to advantage Biden as news cycle after news cycle focused on the bad news from the pandemic.

More recently, Democrats have been nervous that Biden was being too solitary, especially as Trump traveled to battleground states.

On Wednesday, Trump traveled to the swing state of North Carolina, a day after he went to Kenosha.

Biden has started to get on the move. He gave a high-profile speech from Pittsburgh on Tuesday, and will travel to Kenosha himself on Thursday.

Trump in his remarks Wednesday continued to talk about “law and order,” blaming Biden for not talking about law enforcement in his own remarks about the coronavirus and schools.

With the exception of a brief comment about vaccines, Trump made no mention of the pandemic.