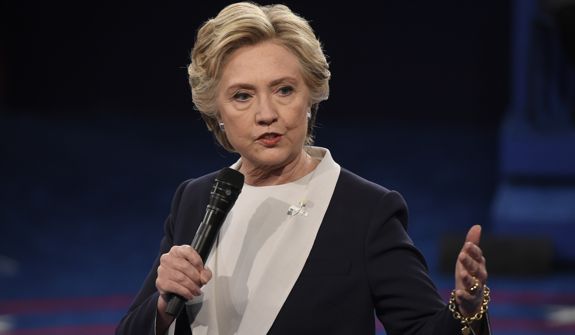 ST. LOUIS — Hillary Clinton ended up helping Donald Trump repair some of the damage from his lewd comments about women this weekend when she ran hard left on the Supreme Court — reinforcing the one overriding reason conservative Republicans have for voting for their flawed presidential nominee.

Her promise to use Supreme Court nominations to push a left-wing agenda did more than anything Mr. Trump said during the debate to win back his supporters, conservative leaders said Wednesday. That included evangelical voters who were repulsed by a 2005 videotape that surfaced over the weekend showing the Republican nominee using vulgar language to boast of his sexual exploits.

“I believe it justifies overriding other concerns like those generated by this tape,” said the Rev. Frank Pavone, national director of Priests for Life.

“Virtue exercised in our own personal choices is important, but policies contain or contradict virtues as well, and there is a corruption in our public policy right now,” he said. “So it is not only that it outweighs the personal failing, of which of course he is repudiated himself and is repenting of, but corruption and immoral outrageous are also incarnated in public policies.”

Mrs. Clinton, the Democratic presidential nominee, never mentioned the Constitution in her answer to a question about the justices she would nominate. Instead, she vowed to pick judges who would pursue abortion rights and impose new carve-outs of First Amendment protections for political speech.