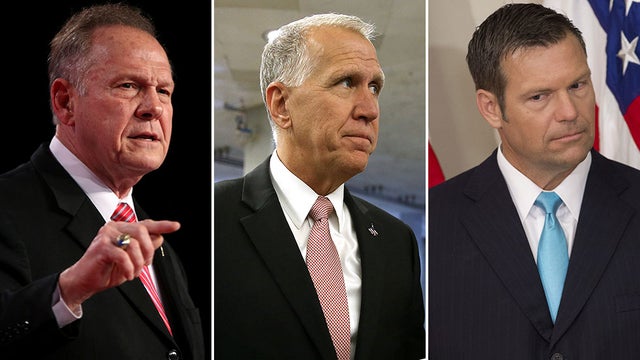 Senate Republicans are facing a potential intraparty brawl as they fight to hold onto the chamber next year.

Republicans are defending 22 seats in 2020, mostly in deep-red states, limiting Democrats’ pickup opportunities and increasing the odds of the GOP keeping the Senate.

But nasty primary fights brewing in a handful of key states could threaten to throw a curveball into the Republican strategy, potentially setting the party up for a repeat of previous cycles when conservatives caused headaches by defeating more-mainstream GOP candidates, only to lose to Democrats in November.

Three races have jumped into the spotlight as looming problem areas for Republicans: In Alabama and Kansas, where conservatives Roy Moore and Kris Kobach are flirting with Senate bids, and in North Carolina, where Sen. Thom Tillis (R-N.C) is viewed as vulnerable to a primary challenge.