‘Democracies are fragile’: Anxieties about election legitimacy and violence rise

by Emily Larsen I The Washington Examiner
September 11, 2020 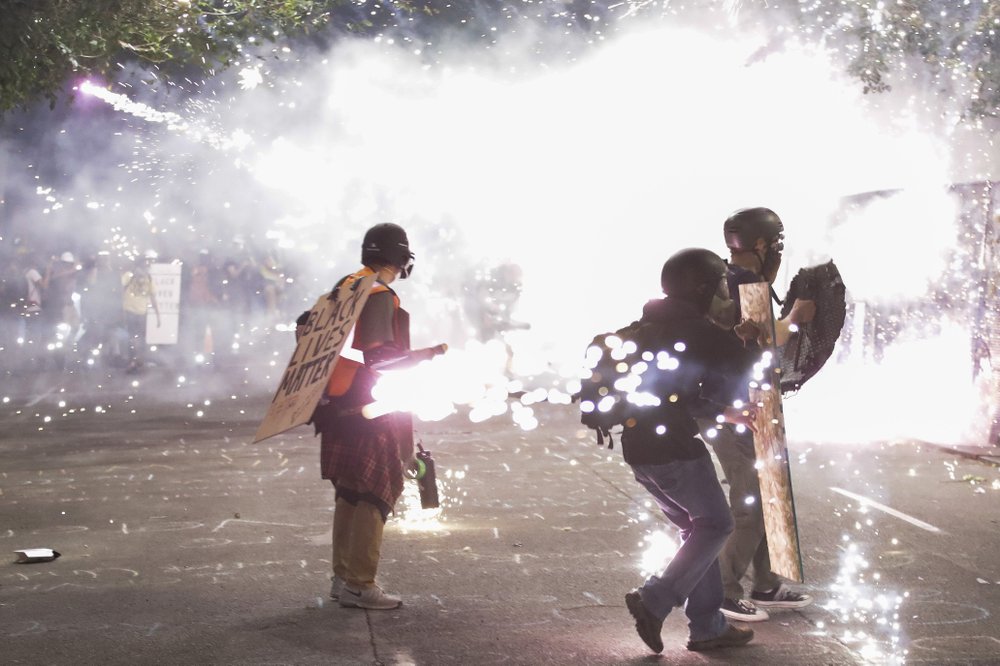 WARREN, Michigan — Voters on both sides of the aisle are experiencing rising anxieties about worst-case post-election scenarios no matter who wins — anxieties over a year of economic and health hardship, social isolation, and riots across a deeply divided country, outrage at the result of the election, and the suspicion that it is illegitimate.

“I have never in my life been more terrified,” Susan Stephenson told the Washington Examiner, adding, “if Trump gets elected, that there is going to be all this craziness … this huge, violent thing.”

Stephenson, a retired teacher who resides in Slippery Rock, Pennsylvania, had just experienced a near-shouting match with a pro-Trump demonstrator outside where Joe Biden gave a speech in Warren, Michigan, on Wednesday. The Trump supporter yelled about Democrats being crooks and socialists, so she, a Biden supporter, whipped out her cellphone to record him. It was not the only heated exchange of words between pro-Trump demonstrators and a handful of Biden supporters that day.

Those tense exchanges and deep divisions are fueling voter worries on both sides of the aisle about whether the election result can be accepted and whether doubt could spark violent uprisings.

Retiree Freddie Wilson, a Trump supporter in Warren, agreed, though, and was somewhat hyperbolic with his reasoning. “This is probably the most violent time in history — even the tumultuous 60s,” he said, citing that as a cause for ”concern” about unrest after the election.

Stephenson pointed to Trump supporters bringing weapons to protests and said that the Biden sign in her yard has been repeatedly vandalized. “I’ve had to buy security gear,” she said. Musing about the fall of Rome and the age of the nation, she added: “Democracies are fragile.”

A Monmouth University national poll conducted Sept. 3-8 found that a significant number of voters could be suspicious of the election result, no matter whether it’s President Trump or Biden who wins.

“We usually focus on the majority’s view when describing public opinion, but in this case, minority opinion could be sizable enough to have an impact on the election’s legitimacy. The question is whether any disbelief in the outcome might lead to other consequences,” said Patrick Murray, director of the Monmouth University Polling Institute.

That sentiment seems to be bipartisan. While voters firmly decided on Biden were somewhat more confident than firm Trump voters in the process, 13% from each group said that they are not at all confident about the election process.

The poll suggests that voters are responding to doomsday post-election scenarios that political insiders have been warning about for weeks. Biden has for months suggested that Trump may refuse to leave the Oval Office, and a group of professors and policy experts have conducted “ war games” based on that concern — also exploring the possibility that Biden won’t accept the election result.

Election experts are warning that because of a huge increase in mail-in voting, it may take weeks to know the election result. Yet Trump says that he thinks a winner should be declared on election night. Meanwhile, former Democratic presidential nominee Hillary Clinton publicly says that she does not think Biden should resign.

“There’s talk like he’ll challenge the election, he’ll say it was a fraud because of the mail-in voting, and he’ll say it wasn’t legitimate, and he’ll look at the Supreme Court to rule on it,” said Don Terrier, 60, a Biden supporter in the Detroit metro area who works in video production. “It might not be a peaceful transition.”

To some voters, narratives from both sides of the aisle seem like a self-fulfilling prophecy.

“Either way it goes, there’s gonna be an uprising,” said Meghan Sotelo, 34, a Biden supporter who owns a landscape company. She worries about riots in Detroit reaching her home in the suburbs. “The Trump supporters will think that, you know, because of the mail-in voting that Biden won. And I think that if Trump wins, they’re going to say that Russia helped get him in.”