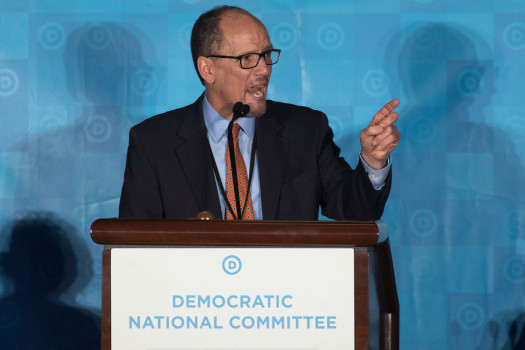 ATLANTA — Former Labor Secretary Thomas E. Perez was elected chairman of the Democratic National Committee on Saturday, narrowly defeating Representative Keith Ellison of Minnesota to take the helm of a still-divided party stunned by President Trump’s victory but hopeful that it can ride the backlash against his presidency to revival.

The balloting, which carried a measure of suspense not seen in the party in decades, revealed that Democrats have yet to heal the wounds from last year’s presidential primary campaign. Mr. Perez, buoyed by activists most loyal to former President Barack Obama and Hillary Clinton, won with 235 votes out of 435 cast on the second ballot.

Mr. Ellison, who was lifted primarily by the liberal enthusiasts of Senator Bernie Sanders of Vermont, captured the remaining 200 votes. But that was only after he had pushed the voting to a second round after Mr. Perez fell a single vote short of winning on the first ballot.