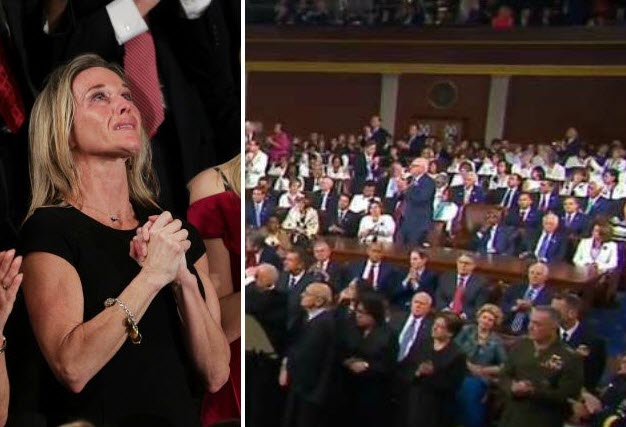 Democrats in Congress refused to stand while a Navy SEAL’s widow was acknowledged by President Trump in his speech before a joint session of Congress Tuesday night.

Sen. Bernie Sanders (I-VT), Sen. Al Franken (D-MN), Rep. Nancy Pelosi (D-CA), and Sen. Patty Murray (D-WA), among others, remained firmly seated and did not applaud at all while the rest of the room gave Carryn Owens a standing ovation, IJR reported.

“We are blessed to be joined tonight by Carryn Owens, the widow of a U.S. Navy special operator, Senior Chief William ‘Ryan’ Owens. Ryan died as he lived: a warrior, and a hero — battling against terrorism and securing our nation,” Trump said, introducing the widow.

Ryan was killed in the line of duty during a raid on a terrorist haven in Yemen. His widow Carryn was seated next to First Daughter Ivanka Trump, clearly distraught as she took the national spotlight.

Senate Majority Leader Chuck Schumer (D-NY), Sen. Al Franken (D-MN), and other Democratic members of Congress did stand and applaud on the second round of ovations, but many others still refused to stand.