DHS Secretary: ‘No Regrets’ For Violating The Law 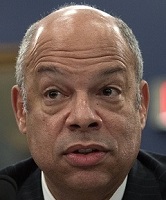 Homeland Security Secretary Jeh Johnson told the Senate Tuesday that he has no regrets at all for going around Congress to implement President Barack Obama’s several immigration-related executive actions.

“Do you regret the actions that you and the administration have taken that have gotten us to this point?” Sen. John Cornyn (R-Texas) asked Johnson at a Senate Judiciary Committee hearing.

U.S. Homeland Security Secretary Jeh Johnson said he had no regrets about his effort to implement President Obama’s executive action on immigration.

“No, I do not, senator,” Johnson replied. “I believe that the undocumented population in this country, at least half of which has been here more than 10 years, has to be reckoned with. We know they’re here, and they are not priorities for removal.”

“There are millions of people in this country who are not priorities for removal,”he added. “There are dozens of states that allow them to have drivers’ licenses.”