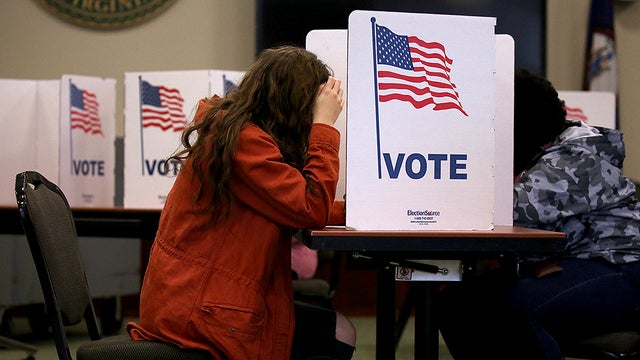 Funding to bolster election security efforts at the state level could become a sticking point during the ongoing government spending talks, with the House approving the funds while Republicans in the Senate remain staunchly opposed.

The spotlight will be on the Senate on Tuesday, as the Appropriations Subcommittee on Financial Services and General Government marks up its portion of the annual spending bill, with the full committee due to vote on the bill Thursday.

While the subcommittee will wait until after the markup to release its version of the annual financial services and general government funding bill, which includes appropriations for the Election Assistance Commission (EAC), it’s unlikely to include election security funds due to Republican opposition.
This could become a factor in negotiations between the House and Senate over government funding bills and make it even more difficult for Congress to approve funding legislation prior to the end of the fiscal year on Sept. 30, which is needed to avert a shutdown.

The House already passed its version of the financial services and general government bill in June, which included $600 million for the EAC to distribute to states in order to “improve the administration of elections for Federal office, including to enhance election technology and make election security improvements.”

Despite strong support for election security funding for states from both House and Senate Democrats, the House version of the appropriations bill passed without a single Republican vote, and Republicans who hold the majority in the Senate look unlikely to include the funding in their version.

Sen. John Kennedy (R-La.), the chairman of the Senate Appropriations Subcommittee on Financial Services and General Government, has been vocal in his opposition to including funding to bolster election security efforts in any funding bill from his panel.

In a speech on the Senate floor last week, Kennedy argued that giving states funding for election security efforts could lead to a federal takeover of elections.

Kennedy noted that there may be an effort during Senate deliberations to give states “$200 million, maybe $400 million, maybe $1 billion” for election security efforts, but did not comment on which of his Senate colleagues may push for these funding levels.

One central reason for Kennedy’s objection to Congress approving election security funding is the $380 million appropriated to states through the EAC in 2018, which Kennedy noted has not all been spent.

According to the EAC, these funds have been mostly designated by states to either replace outdated voting equipment or make cybersecurity enhancements.

EAC Chairwoman Christy McCormick testified to the Senate Rules and Administration Committee in May that about 29 percent of the funds had been spent by states as of April 30, and that the EAC expects around 85 percent of the funds to be used prior to the 2020 elections. States have until the end of fiscal 2023 to use the funds.

Bipartisan state officials have asked for more funds to bolster election security efforts, with the secretaries of state of Connecticut and Louisiana recently calling on Congress for more money to protect elections against cyber threats.

Other secretaries of state also called on Congress to provide their states with additional funding to secure elections at a House Homeland Security Committee hearing in February.

Alabama Secretary of State John Merrill (R) testified that “additional funding is imperative to ensure voting equipment can remain up-to-date and voting systems can remain secure to protect the data of those citizens,” while California Secretary of State Alex Padilla (D) said the $380 million was not “2016, 2018, or 2020 cybersecurity funding.”

In addition to requests from state officials, Senate Democrats have kept up sustained pressure on Senate Majority Leader Mitch McConnell (R-Ky.) to allow votes on a variety of Democratic-backed election security bills, many of which include funding for states to bolster election cybersecurity.

McConnell has refused to allow votes on the majority of these bills due to concerns around federalizing elections, although the Senate has approved legislation to make hacking voting systems a federal crime and to bar individuals who interfere or attempt to interfere in U.S. elections from entering the country.

The strong effort by Democrats to pass election security legislation and funding to bolster state efforts in this area could make approving the annual financial services and general government spending bill, which also includes funds for the Treasury Department and the Judiciary, a problem.

Rep. Cedric Richmond (D-La.), the chairman of the House Homeland Security cybersecurity subcommittee with jurisdiction over some election security elements, told The Hill that Republicans refusing to allocate election security funding would “give considerable heartburn” to the appropriations process.

Both Quigley and Kennedy told The Hill that a continuing resolution (CR) will likely be passed in the Senate to avert a shutdown, which would continue current funding levels for a certain time period and give Congress more time to negotiate.

Kennedy said that while a CR was not ideal, he would be “fine” to approve one if Democrats pushed back on election security funds.

Quigley, on the other hand, said that he viewed a potential CR as “a failure” of Congress.

“I think even a CR is a failure, but beyond that going a whole year on a CR is a worse failure, and a catastrophe shutting down,” Quigley said.

Among Mueller’s findings was that Russian actors launched a social media disinformation campaign designed to favor now-President Trump. Mueller also testified in July that he expects the Russians to attempt to interfere in the 2020 elections.