Even GOP Candidates Court Broncos’ Tebow, But He Says He’s Declined The Offers 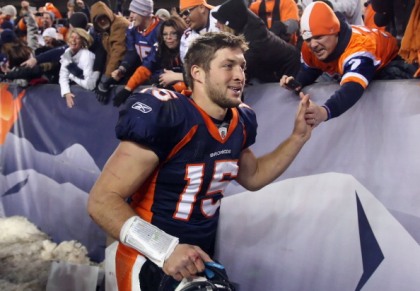 Sensing the excitement and loving his message, Tim Tebow is being courted by Republican presidential candidates. The quarterback recently told The Associated Press heâ€™s been asked by more than one of the contenders for his support. He wouldnâ€™t name names, but did say heâ€™d declined the offer.

â€œI think you have to have so much trust in who you support, just from product endorsements to endorsing a candidate because if that person or company does something (bad), it reflects on you,â€ said Tebow, whoâ€™s a pitchman for Nike, Jockey and FRS energy drink.

Tebow has, however, placed himself in the political realm before â€“ two Super Bowls ago when he starred in a Focus on the Family commercial with his mother sharing the story of how she gave birth to him in the Philippines in 1987 after spurning a doctorâ€™s advice to have an abortion for medical reasons. After being criticized for that ad, he didnâ€™t do an encore and instead tries to toe the line of showing his religion without shoving it down peopleâ€™s throats.