Extermination of Christians in Egypt Not Getting Enough Attention: Piers Morgan Asks, ‘Why?’ 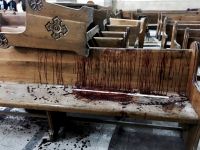 A three-month nationwide state of emergency took effect in Egypt on Monday, following the terror attacks on two Christian churches that killed at least 44 people on Palm Sunday.

ISIS said it sent suicide bombers to the two churches, one in Alexandria and one in Tanta. The head of the Coptic Christian church, Pope Tawadros II, was inside the cathedral in Alexandria when the bomb exploded, but he was not hurt.

ISIS also bombed a Cairo church in December, killing 30 people there, and it has threatened more violence directed at Christians, saying their blood will flow “like rivers,” the Associated Press reported.

While terror attacks in Paris, Nice, London and Sweden all got “huge attention,” the ones in Egypt did not, and that’s a problem, Piers Morgan, the editor-at-large at Daily Mail.com, told Fox News’s Tucker Carlson Monday night.