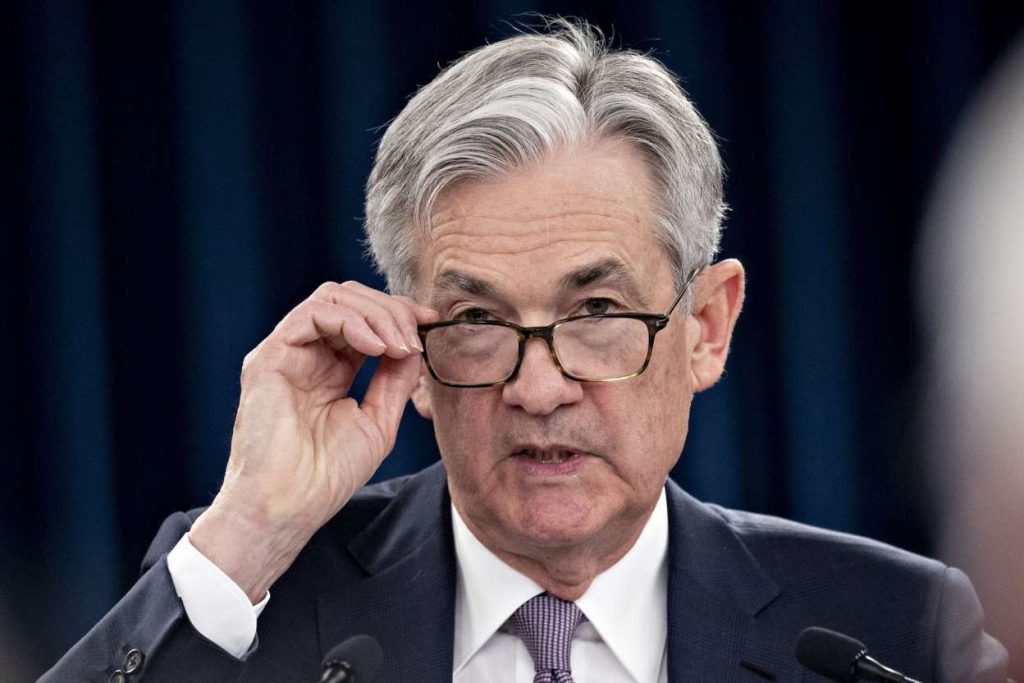 Federal Reserve Chair Jerome H. Powell said Thursday the U.S. economy is in an emergency and is deteriorating “with alarming speed.” His remarks came shortly after the central bank unveiled over $2 trillion in new loans to keep the economy afloat as much of the nation goes into a lockdown to fight the spread of the deadly coronavirus.

“People have been asked to put their lives and livelihoods on hold, at significant economic and personal cost,” Powell said in a Brookings Institution webcast. “We are moving with alarming speed from 50-year lows in unemployment to what will likely be very high, although temporary, levels.”

Powell called for a national discussion about what it will take to reopen the economy, but he urged caution about moving too quickly and triggering another spike in coronavirus cases and deaths. Treasury Secretary Steven Mnuchin has said it’s possible businesses can reopen in May. Powell said sometime after July is more likely.

More than 17 million Americans have filed for unemployment aid in the past four weeks as the nation has entered a national emergency due to the global pandemic, the Labor Department reported Thursday. Powell said the burdens of the shutdown are “falling most heavily on those least able to carry them,” and he vowed to do everything he can to help.

The Fed’s sweeping new loan programs unveiled Thursday will provide $2 trillion in additional aid to small, medium and large companies as well as cash-strapped states and cities. The latest actions are in addition to the central bank slashing interest rates to zero in March and buying numerous government bonds in an effort to keep borrowing as cheap as possible for American families and businesses.

“Our emergency measures are reserved for truly rare circumstances, such as those we face today,” Powell said. “There is every reason to believe that the economic rebound, when it comes, can be robust.”

The Fed’s latest actions go even further than what the central bank did during the Great Recession. The Fed is directly buying debt from large corporations and states, a level of support it hasn’t tried before. There’s widespread worry that some companies and households will go bankrupt during the pandemic because they will not be able to borrow money in time, but the Fed has taken large and unprecedented steps to keep as much credit flowing as possible.

Yet Powell and many top economic leaders are trying to answer two key questions: How deep, and how long, will the economic downturn be? Among Fed leaders, the growing consensus is the economic pain will be substantial, and the recovery will be slow.

There’s widespread agreement people must feel safe to go out again, and the worst possible outcome would be opening the economy too early, triggering another spike in coronavirus cases and deaths.

“We need to have a plan nationally for reopening the economy. We all want it to happen as quickly as possible,” Powell said. “We all want to avoid a false start where we partially reopen and that results in a spike in coronavirus cases.”

The U.S. economy may contract by more than 30 percent in April through June, some economists predict. Powell said the economy would be “very weak.” He is hopeful businesses around the nation can reopen, reviving the economy safely in the second half of the year, but he didn’t want to give a specific month.

“This is a public health issue,” Eric Rosengren, president of the Boston Fed, said in an interview. “These are times if you make bad decisions, they are very costly. We need to try to minimize that.”

Rosengren said it’s “clear” the public health responses in the United States “have not gone as well as they have in some other countries” and that is adding to the economic pain, as businesses have to be closed for a longer period of time.

Richmond Fed President Tom Barkin said the economy can’t bounce back until people feel comfortable to go out again to restaurants, baseball games or concerts. He sees parallels to the Sept. 11, 2001, terrorist attacks on the United States and how unsafe people felt to fly until the government enacted major security overhauls. There will need to be some sort of equivalent for the pandemic, whether it’s a vaccine or an antibody test.

“We’re going to have to think hard about what are the things that will have to make us feel it’s safe to shop again or eat out again,” Barkin said in an interview.

After 9/11, President George W. Bush encouraged people to go out and spend as a form of patriotism, and the nation responded. But that is unlikely to work again, given that the health issues touch so much of the economy. Barkin said it will take some sort of national protocol, such as requiring people to wear masks in public and sit a certain distance apart at restaurants and on airplanes, to get consumer confidence high enough to spend again.

“I actually am more optimistic than many that we can get back to work,” Barkin said. “What I am more worried about is consumer demand.”

As Fed leaders prepare for difficult months ahead for the economy, Wall Street has become more optimistic, partly due to the central bank’s massive actions. U.S. stocks were down about 30 percent in March as coronavirus cases mounted and Congress stalled on passing a $2 trillion relief package. In recent days, stocks have rallied. U.S. stocks are now down about 20 percent from the February highs.

The Fed will soon begin purchasing up to $750 billion in corporate loans from big businesses that had at least an investment grade rating March 22, a high bar that some struggling companies won’t be able to meet. But big retail chains such as Macy’s, Gap or J.C. Penney are likely to qualify since their debt slide below investment grade after that date.

To help midsize companies, the Fed will purchase as much as $600 billion in loans from banks that would go to businesses with up to 10,000 employees. These loans can be anywhere from $1 million to $150 million, larger than what the Small Business Administration is offering. Companies getting this money must be registered in the United States and primarily operating domestically. The loans are for four years, to give businesses time to get back on their feet.

Many states and cities are already warning they are about to run out of cash, as tax revenue have all but dried up and costs have skyrocketed to deal with the health crisis. The Fed plans to start purchasing up to $500 billion in short-term bonds from all 50 states, the District of Columbia and large cities with more than a million people.

To aid small businesses, the Fed has agreed to backstop the Small Business Administration’s Paycheck Protection Program loans, which have had a rocky rollout since they began Friday. Businesses with fewer than 500 employees are supposed to go to banks to get loans of up to $1 million, but many small-business owners complain the bank isn’t taking applications or is demanding too much paperwork.

President Trump has said the small-business lending program has had a “few glitches,” but banks and business owners around the country report mass confusion and delays in accessing the funding. The initial program was supposed to do $350 billion in loans. Trump is asking Congress for an additional $250 million.

The Fed is also buying a wide range of other debts to ensure Americans can still get access to home mortgages, auto loans and other borrowing needs. Powell also stressed Thursday that the Fed is making loans to companies and states, not giving money outright. The Fed does expect to be repaid.