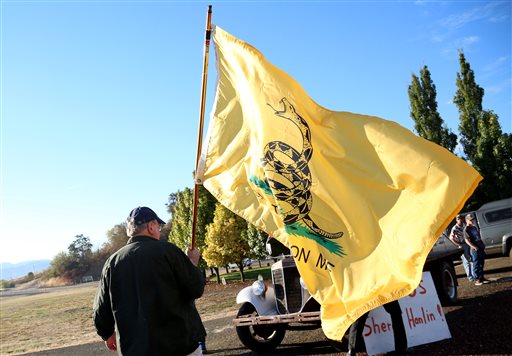 The Equal Employment Opportunity Commission is looking into whether wearing a depiction of the Gadsden flag to work should be considered racial harassment after a black employee at a privately owned business filed a complaint with the federal agency more than two years ago.

The complaint was filed by the black worker in January 2014 after he said one of his coworkers wore a hat depicting a coiled snake with the words “don’t tread on me” repeatedly since the fall of 2013. The complainant did not allege, however, that the employee wearing the hat ever said anything racist to him, the Daily Caller reported.

The complainant said that he made his concern known to his bosses, who then asked the employee to stop wearing the hat. The worker in question kept wearing the hat, however, resulting in the offended employee filing a formal complaint with the EEOC, which oversees issues of discrimination in the workplace.

“It is clear that the Gadsden Flag originated in the Revolutionary War in a non-racial context,” the agency stated in a preliminary ruling, according to the Washington Post. “Moreover, it is clear that the flag and its slogan have been used to express various non-racial sentiments, such as when it is used in the modern Tea Party political movement, guns rights activism, patriotic displays and by the military.”

The agency went on to say, “However, whatever the historic origins and meaning of the symbol, it also has since been sometimes interpreted to convey racially-tinged messages in some contexts,” citing at least two more recent controversies over the flag. The first was that of two Las Vegas police officers whose bodies were draped with the yellow banner after their murders. The second was a incident in which New Haven, Connecticut, firefighters claimed the flag being displayed at work constituted racial insensitivity.