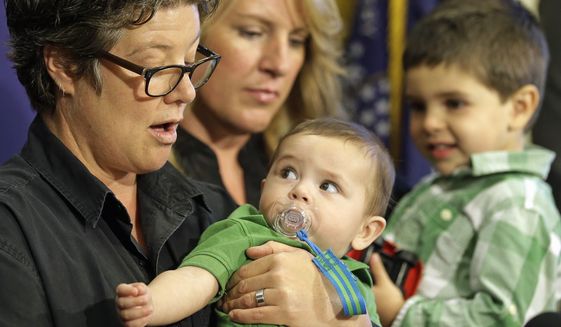 Most of the children of gays and lesbians who have filed court briefs in same-sex marriage cases say their parents’ inability to marry has deprived them of legal protections and hampered them from living their otherwise typical lives.

But four adult children of gay parents — acting as a “quartet of truth” — have submitted briefs to the 5th U.S. CircuitCourt of Appeals opposing same-sex marriages, with several saying that growing up under the rainbow was neither normal nor pleasant. The court, which is considering whether to uphold the man-woman marriage laws in Texas, Louisiana and Mississippi, will hear arguments in New Orleans on Friday.

There are “two rights” that every child shares when they arrive in this world, Katy Faust wrote in her brief. “First, the right to live. Second, the right to have a relationship with his/her father and mother.”

Dawn Stefanowicz said her gay father was so preoccupied with sex that when she was in high school and brought home a male classmate, both her father and his lover propositioned him for sex.

B.N. Klein said her mother and lesbian partner disdained heterosexual families completely, and she didn’t have a clue about the daily interactions of a husband and wife until she went into foster care.

Robert Oscar Lopez said his two lesbian mothers were conscientious about his upbringing, but he became so emotionally confused that he turned to gay prostitution as a teen and gay and bisexual relationships as an adult.