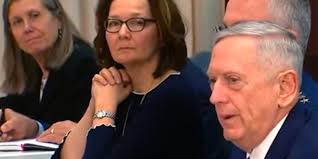 President Trump’s pick to head the CIA is a seasoned spymaster who has avoided the limelight during a 32-year career that has included stints running overseas “black sites” where dangerous terrorists were waterboarded.

Gina Haspel, 61, must be confirmed by the Senate before she takes command of the spy agency from Mike Pompeo, who Trump nominated as Secretary of State after firing Rex Tillerson.

While she has won praise from Washington insiders – including Obama Director of National Intelligence James Clapper and former CIA Director Michael Hayden, she will likely face questions on the Hill about her connection to sites where waterboarding took place. The controversial practice, which simulates drowning, has been likened to torture but supporters say it has helped extract valuable information from hardened terrorists.

Haspel previously served as Pompeo’s deputy. In stepping in as the CIA’s new chief, she becomes the agency’s first-ever female director.