Giuliani, who has battled with Sharpton throughout his career, said Obama couldn’t expect to be seen as supportive of police as long as he associates with Sharpton, an MSNBC talk-show host and longtime activist.

“If he would like to have a poster boy for hating the police, it’s Al Sharpton,” he said while appearing on CBS’ Face the Nation. “You make Al Sharpton a close advisor, you’re going to turn the police in America against you.” 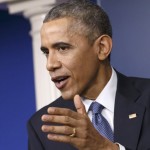 Obama: America ‘less racially divided’ since he took office in 2009

Garner’s daughter on Sharpton: ‘He’s all about the money’

AL SHARPTON LEADS MARCH IN DC AS NYC PROTESTERS CHANT: ‘WHAT DO WE WANT? DEAD COPS!’

Well, Mark and Starla – How did your racist fearmongering work out this time? For the Sugar Bowl, there was NO surge in violence – just the standard stuff that New Orleans always seems to experience. Enough of your bigoted rants. If your campaign for governor is as successful as your New Year’s Eve predictions, you’ll be broke, dishonored and unwanted very soon. Good luck. Now go and find a rat hole to crawl into somewhere and join your little white friends with their funny white sheets.

HaHaHaHa! This NAAWP group is a real JOKE! It looks like a one-man operation run by a guy named DFWDude. He must be a real chickens**t because he doesn’t even identify himself on his own website. They have a HUGE membership of 24 people!! HaHaHa! And no mention of a “travel advisory” on their webpage. NAAWP is a joke. You are a joke. I hope you lose your life savings running for governor. On the other hand, maybe the white people of Louisiana deserve an idiot like you.

NATIONAL ASSOCIATION for the ADVANCEMENT of WHITE PEOPLE – 2014

SUGAR BOWL 2014 is expected to be a VIOLENT in the
BIG EASY!

CRIMES against WHITE PEOPLE in NEW ORLEANS is “OUT
OF CONTROL”

These types of VICIOUS ATTACKS on WHITE PEOPLE
have become the NORM in NEW ORLEANS, rather than the EXCEPTION!

Bill
Callaham, a seasoned trial lawyer from Sacramento, California, has visited New
Orleans many times, never fearing for his safety or questioning the prudence of
strolling around after dark. And so last week, after listening to some
late-night music in the French Quarter, he didn’t think twice about walking
back to the Hyatt Regency Hotel on Loyola Avenue.

Callaham,
66, had crossed Canal Street about 2 a.m. and gone a block or two into the
Central Business District when he first spotted a trio of young men out of the
corner of his eye.

One of them
addressed Callaham, who had flown to the city to give a Dec. 12 address on
trial presentation techniques at a Louisiana Association for Justice
conference.

“They made
some comment which I ignored,” Callaham said in an interview Friday. “I
continued walking without turning back or paying any attention to them.”

The next
thing Callaham remembers, he was staggering down the street, disoriented,
having just regained consciousness. “I was covered in blood, bleeding
profusely,” he said. “I remember standing and leaning on a trash receptacle for
support, trying to figure out why I was bleeding and what was going on.”

“I don’t
know if I was out for 30 seconds or 20 minutes,” he added. “I have no memory at
all of any fight, being hit. Absolutely no memory of any of that.”

At some
point, two young women pulled up in a vehicle, asking whether Callaham needed
help. “I said, ‘I don’t know,’ ” he recalled.

Moments
later, he realized his jaw had been broken and that he needed emergency
treatment. The women drove Callaham to a nearby hospital, and a CT scan soon made
plain the extent of his injuries. “They came back and said, ‘You have very
serious facial and jaw injuries. We can’t handle it here. We’re going to send
you over to University Hospital,’ ” he said.

Callaham
underwent a complicated surgery that took several hours and involved six
surgeons. He had suffered a broken jaw that required placing a metal plate
across his lower mandible, in addition to a fractured nose and several broken
teeth.

“They did a
great job,” Callaham said of the medical staff.

While he’s
already back to work in California, where he practices personal injury law,
Callaham knows the road ahead will be a steep climb. He’s on a fully liquid
diet for eight weeks and has lost seven pounds.

“If somebody
would have confronted me and robbed me and said, ‘Give us all your money; give
us your watch,’ I would have happily done it,” Callaham said. “Believe me, I
would have paid 10 times what I had on me to not be putting up with what I’m
going to be facing.”

Despite his
harrowing encounter, Callaham didn’t hesitate to say he would visit the
Crescent City again some day. “I’ve been to New Orleans many times,” he said,
“and I do enjoy just wandering around and seeing people and things.”

NATIONAL
ASSOCIATION for the ADVANCEMENT of WHITE PEOPLE – 2014

AL
SHARPTON is the BIGGEST PROMOTER of RACIAL HATRED in AMERICA!

NATIONAL ASSOCIATION for
the ADVANCEMENT of WHITE PEOPLE – 2014

93% of the RACE HATE CRIMES COMMITTED in AMERICA in 2014 have been BLACK on WHITE!
AL SHARPTON needs to STICK that CRIME STATISTIC UP his AZZ and SMOKE IT!
NAAWP – 2014

The NAAWP is encouraging UFC FIGHTERS to the 2014 SUGAR BOWL and come prepared to BRAWL!