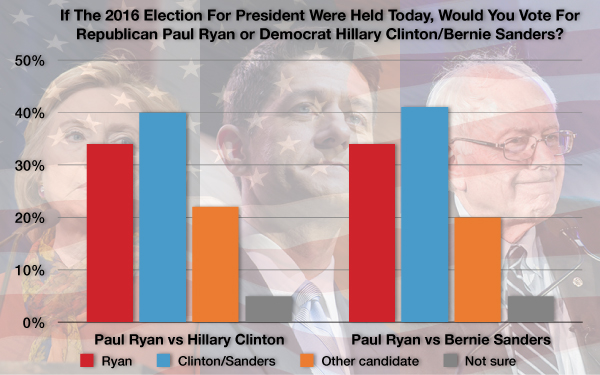 Some top Republicans see House Speaker Paul Ryan as the party’s savior if they can just make him the GOP presidential nominee. But Ryan loses to both major Democratic candidates in head-to-head matchups, with roughly a quarter of Republicans looking somewhere else.

Similarly, Senator Bernie Sanders posts a 41% to 34% win over Ryan, but 20% like another candidate. Five percent (5%) are undecided in both cases.

A closer look at the numbers, however, suggests the danger to Republicans of a brokered convention that denies Donald Trump or Ted Cruz the nomination. Ryan earns GOP support only in the high 50s against both Democrats. If Ryan is the GOP’s choice to run against Clinton, 28% of Republicans opt for someone else. If Sanders is Ryan’s opponent, 24% of GOP voters like another candidate.

Twenty-four percent (24%) of GOP voters said last month that they are Very Likely to vote for Trump if he runs as a third-party presidential candidate.