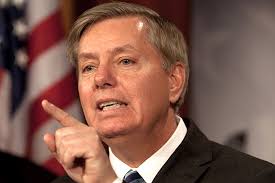 During an appearance on “Hannity” Wednesday, host Sean Hannity noted Horowitz will be coming before Graham’s committee on Dec. 11 to testify on the matter and went on to ask Graham not to allow a Friday night document “dump” that could muffle the coverage of the news.

In response, Graham smiled and nodded.

“It’ll be December 9th — you’ll get the report,” the South Carolina lawmaker said.