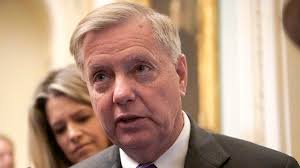 Sen. Lindsey Graham (R-S.C.) said Thursday he would like to bring Deputy Attorney General Rod Rosenstein back to Capitol Hill to testify about claims that the Justice Department official discussed a plan to potentially remove President Trump from office.

Graham, who serves as chairman of the Judiciary Committee, indicated his interest in hearing from Rosenstein after former FBI Deputy Director Andrew McCabe told CBS that Rosenstein had offered to wear a wire around the president and that there were serious conversations about invoking the 25th Amendment to remove Trump.

Yeah, I would like to know what happened. You’re having a conversation about whether or not you’re going to invoke the 25th Amendment,” Graham said when asked if he would subpoena Rosenstein to testify if he didn’t agree to appear before the panel.

“I imagine if the shoe were on the other foot, my Democratic colleagues would want to know about that conversation if it involved a Democrat. Absolutely, I want to hear from him at the appropriate time,” he added.