Health Care Overhaul Bill Is ‘Hanging by a Thread’: Dodd 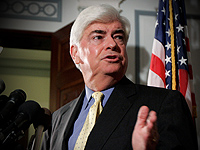 Health care reform is “hanging on by a thread,” and one or two votes could determine the outcome of the heavily-debated bill, Democratic Sen. Chris Dodd told CNBC Monday.

“Everyone feels, I guess, to some degree who have been for this, that they would have liked something different, and that’s not uncommon when you’re considering an issue of this magnitude,” Dodd said.

Some progressives, for example, are disappointed that the Senate bill, unlike the House version, does not include a public option, he said. Senators Joe Lieberman of Connecticut and Blanche Lincoln of Arkansas are two people who voted for the bill in its original form and are now carefully watching what changes are being made.

President Obama’s administration has come under fire lately for putting too much emphasis on health care reform, causing many to question whether Democrats will retain their majority control come November. But Dodd, who is retiring this year, said it’s an issue that needed to be dealt with â€” otherwise it would “strangle our economy,” he said.

“If this is all about surviving politically, then we’re missing the whole purpose of what we’re supposed to be doing,” he said.

Last week, Dodd, 65, announced that he would not run for reelection in November. His announcement was seen by many as a concession that he and the Democratic party are facing an uphill battle. But Republicans have said that as a result of his retirement, Democrats have a much better chance of holding onto his seat.

As chairman of the Senate Banking Committee, Dodd said he is also moving forward with the financial reform bill, and that the committee is closer to answering fundamental questions, such as too big to fail.

He hopes the legislation will more strictly regulate derivatives and consolidate the number of financial regulators, and he hopes to mark the bill up in the committee by the end of the month.

He said the committee is in agreement that there should be an independent agency to protect consumers, but there is still debate over which form it will take.

Dodd also said he thinks it would be a “travesty” not to confirm Federal Reserve Chairman Ben Bernanke’s nomination, and that in the absence of taxpayer money, the government should have no say in banks’ compensation practices.