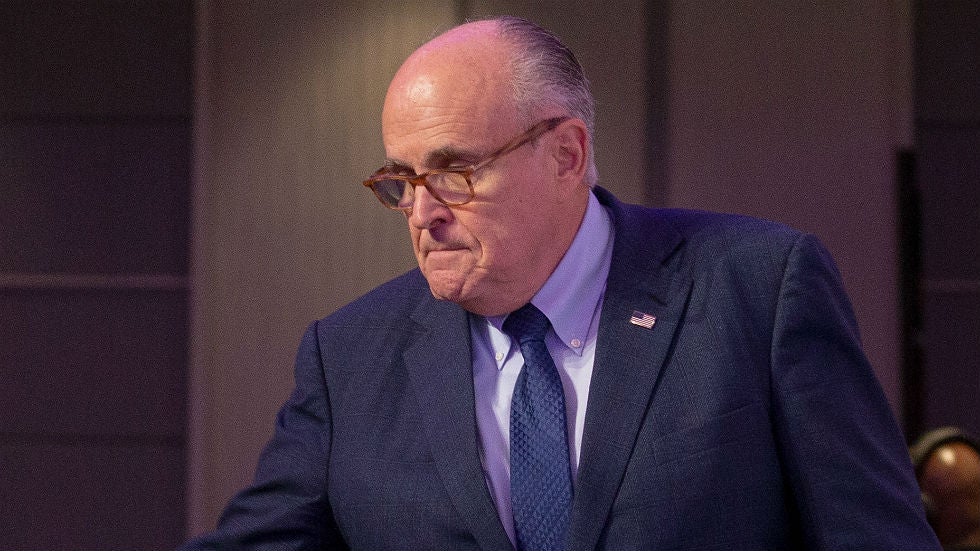 House Democrats on Monday subpoenaed President Trump’s personal lawyer, Rudy Giuliani, as part of their investigation into the president’s efforts to get the Ukrainian government to investigate former Vice President Joe Biden.

The chairmen of the House Intelligence, Oversight and Foreign Affairs committees asked Giuliani to hand over documents by Oct. 15.

“Your failure or refusal to comply with the subpoena, including at the direction or behest of the president or the White House, shall constitute evidence of obstruction of the House’s impeachment inquiry and may be used as an adverse inference against you and the president,” the chairmen warned in a letter to Giuliani.

The subpoena requires Giuliani to produce communications — including text messages and phone records — regarding Biden’s son, Hunter, who served on the board of a Ukrainian energy company and efforts by Giuliani or his associates to pressure current or former Ukrainian officials to investigate matters regarding Biden or any other American.

The chairmen also asked that Giuliani hand over communications regarding U.S. foreign assistance to Ukraine and any efforts to withhold or delay it.

Trump has denied withholding the aid as leverage to pressure the Ukrainian government to dig up dirt on the Bidens, though the move to delay it came just days before the July 25 phone call with President Volodymyr Zelensky that is at the center of the impeachment push.

Giuliani and Trump had been pressing for an investigation into whether Biden, as vice president, pressured a Ukrainian prosecutor to drop a probe of the company. However, there is no evidence that Hunter Biden was ever under investigation.

A rough transcript of the call released by the White House last week showed that Trump said that he would ask Giuliani as well as Attorney General William Barr to get in touch with Zelensky.

“Rudy very much knows what’s happening and he is a very capable guy. If you could speak to him that would be great,” Trump said, expressing confidence that “we will get to the bottom of it.”

Giuliani responded to the subpoena on Twitter, writing that he will give it “appropriate consideration,” though he feels it “raises significant issues concerning legitimacy and constitutional and legal issues.”

During an interview with CNN’s Chris Cuomo on Sept. 19, Giuliani initially said that he didn’t ask Ukrainian officials to investigate Biden. But he later admitted that “of course, I did” ask the Ukrainian government to look into the allegations.

“I asked them to look into the allegations that related to my client, which tangentially involved Joe Biden in a massive bribery scheme,” Giuliani said.

“A President telling a Pres-elect of a well known corrupt country he better investigate corruption that affects US is doing his job. Maybe if Obama did that the Biden Family wouldn’t have bilked millions from Ukraine and billions from China; being covered up by a Corrupt Media,” Giuliani later tweeted.

“In addition to this stark admission, you stated more recently that you are in possession of evidence — in the form of text messages, phone records, and other communications — indicating that you were not acting alone and that other Trump Administration officials may have been involved in this scheme,” the chairmen wrote to Giuliani.

The subpoena was issued by the Intelligence Committee, in consultation with the Foreign Affairs and Oversight panels. All three chairmen signed the letter to Giuliani.

The depositions with Giuliani’s business associates were noticed for Oct. 10, 11 and 14. Parnas, Fruman and Kislin were asked to inform the committees by 5 p.m. on Oct. 1 if they intend to voluntarily comply, “or whether the committees should pursue alternative means to obtain the information.”

The subpoena comes as Democrats are moving quickly to advance their impeachment inquiry.

They also issued a subpoena to Secretary of State Mike Pompeo for documents on Friday and demanded that he make five State Department officials available for depositions over the next two weeks.