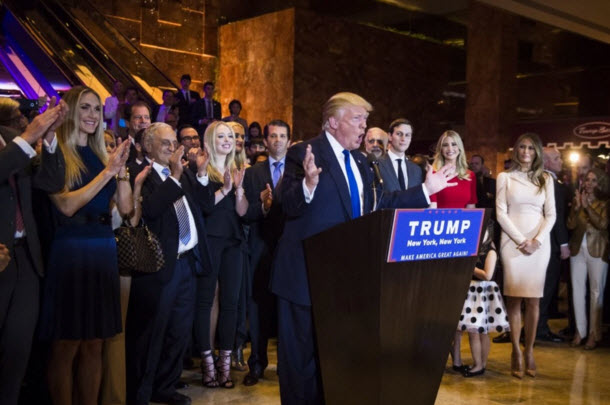 Donald Trump’s campaign advisers believe the billionaire mogul is emerging as the “prohibitive favorite” in the Republican presidential race and project that he will accumulate more than 1,400 delegates to secure the nomination on the first round of balloting at the party’s Cleveland convention, according to an internal campaign memorandum.

The projections come in a memo distributed to Trump surrogates late Tuesday night containing talking points for use in media interviews this week. The memo, obtained by The Washington Post, describes Trump’s commanding win in the New York primary as “YUGE” and encourages his supporters to speak out about what Trump has described as a “rigged” process of selecting delegates for the Republican National Convention in July.

The memo refers to the campaign’s staff shakeup, with campaign manager Corey Lewandowski’s power diminished and newly-hired adviser Paul Manafort assuming broad control over the campaign’s strategy and its enhanced budget. It reads, “Building out our campaign staff to make sure we leave no stone unturned and that we can win this thing on the up and up — not through a rigged set of rules.”

“The Cruz spin machine produces more lies than anything else,” the memo reads. “Our projections call for us to accumulate over 1400 delegates and thus a first ballot nomination win in Cleveland.”