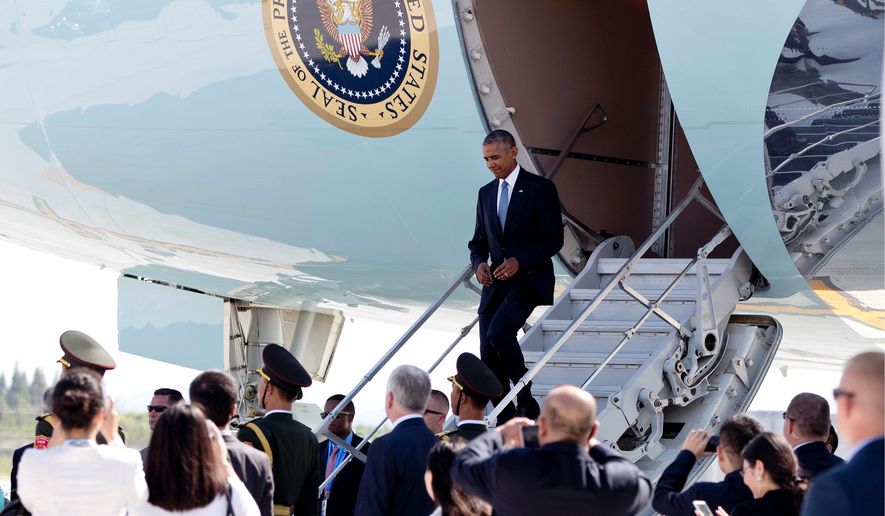 On President Obama’s final trip to Asia, his lame-duck status is showing.

Mr. Obama, who arrived in Laos late Monday night to become the first U.S. president ever to visit the Southeast Asian country, is encountering more than his usual share of friction and confrontation on his 10th trip to the region.

It started with his arrival at the airport in China, where Chinese officials failed to provide a portable staircase for Mr. Obama to disembark from the upper door of Air Force One with the typical grandiose visibility befitting a visiting head of state. Instead, the president emerged from a smaller staircase in the belly of the aircraft, and many saw it as a deliberate sign of disrespect by the Chinese.

Republican nominee Donald Trump said he would have refused to meet with Chinese officials if they treated him like they treated Mr. Obama. 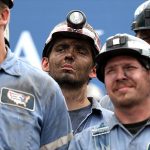 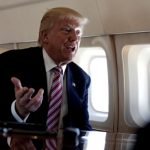 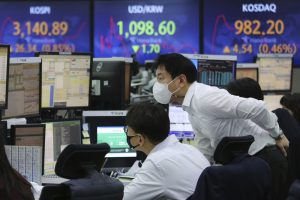 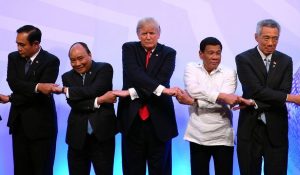 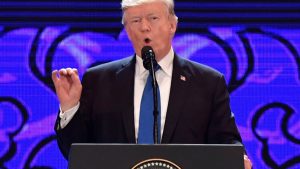 Has there been any country that obummer hasn’t been too wasting the taxpayers money?

You wait and see. He’ll throw some more of our money and resources at them – to buy favor for himself.

Wish everyone would give the slimeball the one finger salute—> ,,!,,

He certainly looked very small in a large door and ladder going down it. Chinese had to be chuckling as he decended the ladder. Just shows you how little the man really is and the facts that over eight years the Chinese have lent trillions of dollars to that man and he owes them.

This picture was taken too close, it needs to have been farther away to get the full effect of where he was coming out.

Nobody respects him and through his tenure in office I have posted article after article on this from European papers and nobody listened, called me names, said I lied etc.

Well folks now they are doing it up in his face and hopefully someone will greet him with a “Special” hello from a drone. Do us a favor.

Yes, the Koreans had three missles in flight per msm only 650 miles from the Kenyan, and darn, none of them went astray!

I keep saying, you always check the golf course first.

I’m sure Trump would have – but Trump is a Leader and Barryo is only the Pretender in Chief.

The WHOLE WORLD hates this embarrassing clown, the only clown not to get the red carpet treatment, so he used one of his prayer rugs, and then they wouldn’t let him have steps to get off the plain! We had the best laugh and we still are!

You CAN NOT disrespect someone who hasn’t any respect for anything but himself. He is a total disgrace to the United States and absolutely the worst POTUS “”EVER””!!!!

“You CAN NOT disrespect someone who hasn’t any respect for anything but himself.”

That’s NOT true, he respects Muslim Terrorists. The rest of your statement I totally agree with, and will go one better, he’s a TRAITOR.

He is a PRETEND GAY POTUS !

I’m sure it’s difficult for the Chinese to respect someone who doesn’t even defend or promote his own country, if it is, and whose actions actually benefit almost any other country than the one he’s leading, except Israel, particularly Muslim countries. That, plus the fact that he’s spending money borrowed from the Chinese like water, literally stealing money that we’ll never be able to pay back, might be a clue as to why they don’t respect him. People who are living on borrowed money shouldn’t be taking million dollar vacations several times a year.

We’re borrowing money from people who hate us, to GIVE to people who not only HATE us, but are trying to KILL us. And in the meantime, our OWN people are starving, jobless, and homeless. This is one time I have no problem with someone snubbing the US President. I ALMOST said OUR president, but until he furnishes IRREFUTABLE PROOF that he was eligible, I don’t consider him MY president. The Chinese get plenty in return from the US for the money they’re loaning us, in one form or another. Just look at the stuff in your home, if you have one. Just about EVERYTHING says Made in China, plus, if you do business in China, you have to make them a partner. Here in the US, we GIVE everything away. That’s why just about everybody wants to come to THIS country illegally. It’s almost worth denouncing your American Citizenship and coming back ILLEGALLY.

We don’t have a president. We have an empty suit instead with an empty brain.

Hey Obama, can you take a hint? Looks like the Asians no longer consider you worth-while. Guess they are telling you that they are not going to go along with you and Soros on Global warming or with the N W O, unless you give up even more at our country’s expense, then even of you do, they will take, but not give. Oh, it will seem that they are giving, but not really. They are playing you, for the fool that you are.
So the President of the Philippians insulted you the other day, and today it is China, now wait and see what Putin does with and to you.

And even Cuba did earlier this year! And this country hates him even more! He can forget the UN job, everybody will tell him to go to he$$, and global change is slowly getting canned, England just canned the scam!

“Donald Trump earned the endorsement of 88 retired generals and admirals in an open letter released Tuesday, as the Republican nominee looks to solidify support in the military community against Hillary Clinton in November.
The Republican nominee’s campaign unveiled the letter, organized by Major Gen. Sidney Shachnow, a 40-year Army veteran and Holocaust survivor, and Rear Admiral Charles Williams, ahead of a speech on veterans affairs in Virginia Beach, Virginia.”

“Shachnow declared that Trump “has the temperament to commander-in-chief,” while Williams called the Republican nominee “more trusted” than Clinton.
In the letter, the retired military leaders warned of the “potentially extremely perilous” combination of budget cuts and policy choices will “emboldened” enemies of the country as a result of those actions.
“That is especially the case if our government persists in the practices that have brought us to this present pass,” they wrote in the letter. “For this reason, we support Donald Trump and his commitment to rebuild our military, to secure our borders, to defeat our Islamic supremacist adversaries and restore law and order domestically. We urge our fellow Americans to do the same.”

That is music to my ears friend, love hearing that! And she was bragging (lying) today about these commanders backing her because of her experience, HA, HA, ……….

I would love to hear that Putin knocked the living CHIT out of Obama !

Obama is a pansey…she deserves no respect.

Hihum, just another day with shame by the chief America hater.